What Is The Connection Between Sinusitis and Sleep Apnea?

Sleep Apnea and sinusitis are both health conditions that reduce your quality of sleep. While Obstructive Sleep Apnea blocks the throat, sinus inflammation blocks the nasal passages. The result of either condition is an inability to get a good night’s sleep. When this happens on a regular basis, it leads to chronic sleep loss and fatigue.

Chronic sleep loss leads to a whole host of health problems from high blood pressure to diabetes. If you think you are suffering from Sleep Apnea or sinusitis or both, start by learning more about the connection between these medical conditions.

Sinusitis is caused by swelling and inflammation in the nasal cavities. The nasal cavities, also known as sinuses, are located in two areas of the face. This includes the forehead just above the area between the eyebrows, as well as under the eyes in each cheek. The sinus cavity is surrounded by bone, lined with fine hairs called cilia that work like brooms, and are filled air.

According to Cedars-Sinai, the purpose of the sinuses is to lighten the weight of our skulls and give our voices a boost. However, sinuses are most beneficial for producing mucus. This mucus is used as a protectant for the nasal cavities.

Each time you inhale through the nose, this mucus and cilia work together to trap dust, dirt, pollutants, bacteria, and other particles. This stops these particles from entering the body, especially the lungs.

Normally, the sinuses drain every 10 minutes to maintain a clear passage. When you get a cold or suffer from allergies, the nasal passages typically swell up which blocks the flow of the sinuses. However, when you are sick the nasal passages are unable to clean themselves naturally. This leads to a build-up of mucus that contains bacteria.

If this bacteria continues to build up in the nasal passages, it leads to inflammation. Acute sinusitis is the primary condition caused by inflamed nasal passages. If left untreated, this condition becomes chronic sinusitis lasting up to eight weeks. Subsequent nasal congestion will most likely prevent you from getting a good night’s sleep. You may also have facial pain and a runny nose along with headaches.

What is Sleep Apnea

Sleep Apnea is a sleep disorder resulting in interrupted sleep caused by breathing problems. When you are diagnosed with Sleep Apnea, your upper airway is blocked when you are asleep.

The blockage can be slight or complete and leave you gasping for air. When this happens, your brain should receive the message to breathe, but instead, you stop breathing while sleeping.

Most of the time, you wake up after not breathing and regain your breathing pattern. However, this disrupts your sleep and causes a lack of reaching the critical deep sleep stage. The result is feeling tired and irritable during the day due to a lack of sleep.

Over time this chronic lack of sleep leads to and is associated with more concerning health problems. These include daytime fogginess and fatigue that makes you feel more irritable and stressed. Over time, chronic stress is consistent with causing high blood pressure, heart attacks, obesity, high cholesterol, and diabetes. Sleep Apnea and its associated symptoms are serious health conditions that if left untreated can be fatal.

Is There a Connection Between Sinusitis and Sleep Apnea?

According to a study published in 2016 in Scientific Reports titled “Obstructive Sleep Apnea and the Subsequent Risk of Chronic Rhinosinusitis: A Population-Based Study,” the connection between sinusitis and Sleep Apnea is still not clear. In the study, researchers followed 971 patients with Obstructive Sleep Apnea, as well as 4,855 patients not diagnosed with OSA, for five years.

However, there is a slight increase in the risk that an individual with Sleep Apnea will also have sinusitis. The symptoms of sinusitis are nasal congestion, inflammation in the ear, and sinus pressure.

These all cause an inability to breathe easily while sleeping. As a result, someone who is diagnosed with chronic sinusitis and does not seek treatment is likely to develop Obstructive Sleep Apnea.

With sinusitis, the nasal passages close off and block the airways when the individual is sleeping. This is different from OSA that occurs due to overly relaxed muscles. Sleep Apnea associated with chronic sinusitis can be treated effectively when the patient treats their sinusitis.

Does Nasal Congestion Cause Sleep Apnea?

When you are diagnosed with nasal congestion, you are unable to breathe properly at any time of the day. However, at night you will likely notice that it is more difficult to fall asleep because of stuffed or runny sinuses. This blockage prevents you from staying asleep, just as with sleep apnea. But are Sleep Apnea and sinus infections related, and can you avoid Sleep Apnea by treating sinusitis?

Obstructive Sleep Apnea is a sleep disorder while sinusitis is a temporary infection. Sinusitis will eventually clear itself or may be treated with antibiotics. Once you have successfully treated sinus problems, you will not suffer from breathing problems at night caused by a sinus infection.

However, if you have chronic or reoccurring sinusitis, this increases your risk of Sleep Apnea caused by nasal congestion. Sleep Apnea, on the other hand, cannot be treated with antibiotics and will not clear up on its own.

Note that there are two types of nasal congestion that can increase your risk factor for OSA:

To be diagnosed with Obstructive Sleep Apnea, you will want to get a sleep apnea test from a medical provider or sleep study clinic. Based on your sleep test results, your doctor may likely recommend CPAP machines for treating Sleep Apnea.

Can Sleep Apnea Be Caused by Allergies?

As noted, chronic allergies can lead to Sleep Apnea. However, having allergies does not automatically mean you will be diagnosed with Obstructive Sleep Apnea. For example, if you suffer from seasonal allergies that last for a few weeks in the spring and fall, then you most likely will not have OSA due to allergies. On the other hand, if you experience chronic allergies throughout the year, this can create long-term breathing issues.

CPAP.com was founded in 1999 with the goal of providing affordable equipment for Sleep Apnea sufferers. Today our family owned and operated business has more than 1,000 different products for Sleep Apnea patients. Contact CPAP.com and subscribe to our newsletter to stay up to date on the latest news and the most effective treatments for Sleep Apnea. 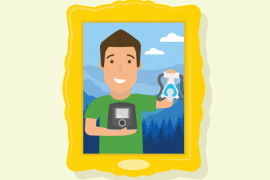 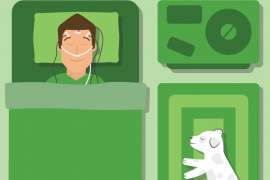 Dr. Kimberly: Everything You Need to Know About Home Sleep Studies