According to a new Harvard study, you could be trimming decades off your life if you are living with untreated sleep apnea.

As you know, obstructive sleep apnea (OSA) is a breathing disorder that occurs while you sleep. It blocks your airways, limits the oxygen to your brain, and has been closely linked to a host of health issues such as high blood pressure, diabetes, Alzheimer’s, and depression. It’s no wonder that it may also shorten your life.

A study, recently published in the health journal Sleep, confirmed untreated sleep apnea disrupts the circadian rhythms necessary for a good night’s sleep. But they also found something somewhat unexpected.

The DNA in the cells of those who left their sleep apnea untreated was “aging” faster than it should. As DNA ages, cells begin to break down, and health risk for cancer and chronic disease goes up. Many of these diseases, including untreated sleep apnea, have the potential to shorten your lifespan.

The Years He Can’t Get Back:

Being diagnosed with diabetes, high blood pressure, and depression, Carl* was accustomed to living a life that revolved around medication, testing, and doctors visits. But it was the daily exhaustion that made it all worse. Most days, he didn’t want to get out of bed.

On occasion, he’d overhear his 4-year-old granddaughter from the other room asking his wife, “What’s wrong with Grandpa. Is he sick again?” It ate him up inside to think that as she grew, this was the man she would remember. 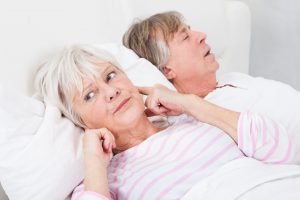 So Carl did some research online. He found out that many of his seemingly unrelated chronic illnesses could be connected to how much he struggled to sleep at night.

He would routinely wake up gasping for air, and often reached the morning feeling exhausted instead of well-rested. His wife was also exhausted from sleepless nights due to her husbands snoring.

Carl took action and finally talked with his doctor about his sleep-related symptoms and was promptly scheduled for a sleep study. He discovered that he had sleep apnea, and that left untreated, it would continue to damage his health. With a diagnosis and prescription, he could begin treatment and start reclaiming the years he felt he had lost to untreated sleep apnea.

“Although there is no cure for sleep apnea, recent studies show that successful treatment can reduce the risk of heart and blood pressure problems.” – National Institute of Neurological Disorders and Stroke

What to Do If You Suspect You Have Sleep Apnea

If you suspect you have untreated sleep apnea, don’t delay in speaking with your doctor. In the meantime, try a few of these steps to improve your breathing, sleep, and health.

Are you concerned you may have OSA? Don’t allow your health and quality of life to deteriorate. Take our sleep apnea symptom quiz to see what your potential risk is.

*  This story is based on a combination of personal stories. Names and specific details were altered for privacy.

Aaron McCann has been working in the CPAP industry for nearly five years researching and learning about the latest and greatest in CPAP therapy and equipment. Aaron is committed to helping the CPAP community achieve better sleep and a better quality of life!