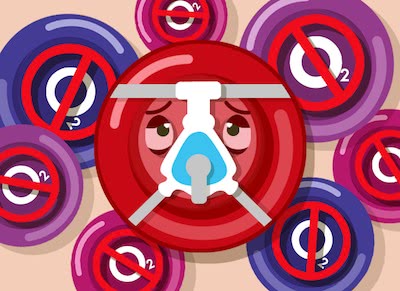 We take a deep dive into Hypoxia, a condition when the tissues of the body don’t get enough oxygen from the red blood cells. We’ll also cover Hypoxemia. With Hypoxemia the red blood cells become starved of oxygen causing Hypoxia. Can Sleep Apnea cause these deadly conditions? Read on to find out!

Hypoxia is a medical condition where the tissues (specifically the brain and other vital organs) don’t get enough oxygen and can be the result of hypoxemia, a condition in which the bloodstream is deprived of oxygen and saturation levels are low. Hypoxia is dangerous because it can cause permanent damage to vital organs, and can be fatal if not treated fast enough.

Know that even though the spellings are similar, hypoxia and hypoxemia are two different conditions. Hypoxemia is a condition in which the red blood cells become starved of oxygen, and over time this can cause hypoxia, a condition where the tissues lack enough oxygen to function.

What is a Normal Oxygen Level?

Normal blood oxygen levels are approximately 75 – 100 millimeters of mercury (the standard measurement of blood oxygen). If blood oxygen levels drop below 60 mm, hypoxemia may develop and supplemental oxygen may be prescribed. In looking at this from the perspective of a pulse oximeter readout, normal readings are between 95 and 100. Values below 90 are considered low.

What are the Symptoms of Hypoxia?

There are quite a few symptoms of hypoxia, and we’ll list them here:

Hypoxia is a medical emergency and is treated in the Emergency Room. Afterward, your doctor may prescribe supplemental oxygen.

Are Hypoxia and Hypoxemia the Same Thing?

As we stated before, hypoxia and hypoxemia are not the same things. Air is a mixture of oxygen and other gasses, and when it is inhaled, it travels into the lungs. The lungs, in turn, take the oxygen from the air and attach to red blood cells, which deliver the oxygen to the tissues throughout the body. The tissues take the oxygen and use it to function, and send the red blood cells back to the lungs with carbon dioxide.

In the lungs, the carbon dioxide is exchanged for oxygen and the process repeats again. If a respiratory condition makes it difficult to breathe, or if some condition otherwise causes a reduction of oxygen in the blood, hypoxemia will result. Hypoxemia is a condition in which the body doesn’t have enough oxygen in the blood, and hypoxia is a condition that can result. In hypoxia, major organs lack enough oxygen to function, and it can result in damage to these organs or death.

Severe asthma can cause hypoxia, as well as serious respiratory diseases like COPD and Emphysema. It can also be caused by certain pain medications or drugs that impact breathing. In some cases, anemia can cause low blood oxygen levels. Cyanide poisoning can also result in hypoxia.

Can Hypoxia be Caused by Sleep Apnea?

Sleep Apnea alone, except in the most severe cases, doesn’t directly cause hypoxia, but scientists are currently studying what role Sleep Apnea plays in the development of hypoxia.

Recent studies have found, however, that hypoxemia can be influenced by Sleep Apnea. During the night, when a person is struggling with apneas, air isn’t reaching the lungs, and as a result blood oxygen declines. The resulting loss of blood oxygen is only temporary. When a person awakens, the airway blockage is no longer there, and a person can breathe normally. Oxygen returns to the lungs, and blood oxygen levels rise.

Does Sleep Apnea Cause Daytime Hypoxia?

In 2008, researchers writing for the medical journal “Sleep”, discovered that among cases of severe Sleep Apnea at night, those individuals were more likely to experience daytime hypoxemia than individuals without Sleep Apnea. Remember that hypoxemia is simply having a low blood oxygen levels. The relationship shows that if a person has severe Sleep Apnea, it’s important to get treatment, as they are almost certainly experiencing other issues like cardiac trouble and high blood pressure.

Treating Sleep Apnea is most commonly done with a CPAP machine, which uses pressurized air to open the airway. With the airway open, air is able to reach the lungs, and in the process, blood oxygen increases.

Hypoxia is life-threatening and the impacts from it can be permanent. If you suspect you’re suffering from hypoxia, it’s important to get to a hospital for treatment immediately. The doctor will need to put you on supplemental oxygen right away and monitor your condition, as well as run tests to assess whether or not damage has occurred.

How Do You Treat Hypoxia?

Hypoxia is typically treated with supplemental oxygen. Since the outside air is a combination of oxygen and other gasses, the concentration of oxygen in the air is only around 21%. While that may be good enough for someone without breathing problems, if you’re also having breathing troubles, less air is getting to your lungs. The goal with supplemental oxygen is to increase the amount of oxygen contained in each breath to drive up the amount of oxygen in the blood. By doing that, you’ll be providing enough oxygen to your tissues, and as a result, the symptoms of hypoxia will usually decrease.

Oxygen concentrators can be purchased by prescription only, and are intended to treat only specific diseases. They aren’t intended for recreational uses, like athletic training.

Oxygen concentrators are available in pulse dose (providing oxygen only when inhaling) or continuous flow. The right type and setting for you is going to depend on what your doctor thinks is best, and that’s going to determine the type of machine you need to get. CPAP.com has a selection of both pulse dose and continuous models and has a great selection of home and portable oxygen concentrators.

Most oxygen concentrators are fairly expensive and can cost anywhere from $1,500 to $2,500 or more. Even at that cost, it’s better than having to pay for tanked oxygen deliveries.

Hypoxia is a serious medical condition that requires immediate medical attention. We learned about the differences between hypoxia and hypoxemia, and how supplemental oxygen can work to increase the amount of oxygen in your blood. We also learned how oxygen concentrators can work to reduce the reliance on tanked oxygen. We saw that daytime hypoxemia also has a relationship to Sleep Apnea and that treating severe apnea can lead to a longer, more fulfilling life.

4. National Heart, Lung, and Blood Institute. How the Lungs Work. Published on their official website. Accessed on November 8, 2018.