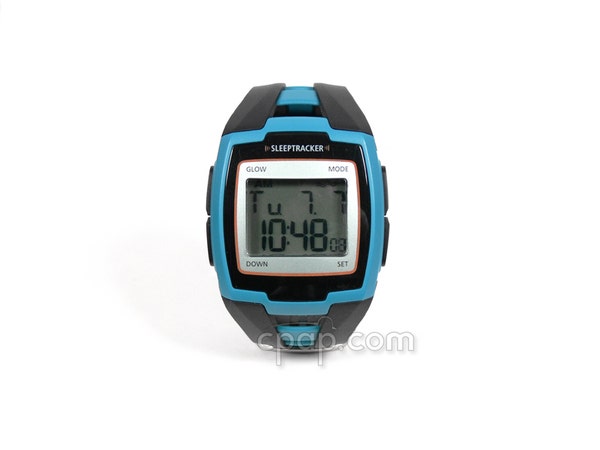 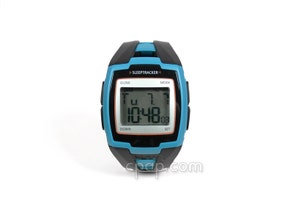 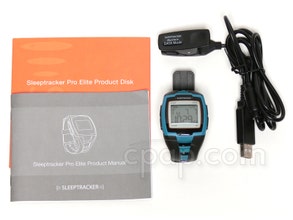 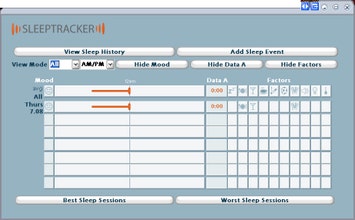 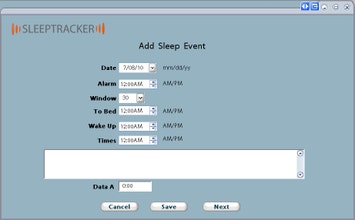 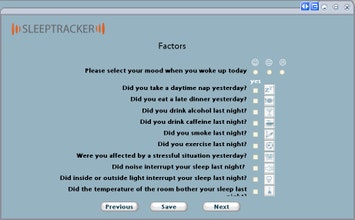 Sleeptracker is a sleep management tool built into a wrist watch. The Sleeptracker Elite uses a small accelerometer to monitor lateral motion associated with specific sleep phases. The average adult experiences four to five sleep phases over an eight-hour period. Once you set the Sleeptracker, internal sensors detect subtle physical signals from your body and uses a vibrating alarm to wake you at the 'almost-awake' sleep phase. Waking up at the perfect time eliminates grogginess and that tired feeling you get in the morning. Use the watch's recording and software capabilities to analyze sleep data over time. Sleeptracker will provide helpful tips and allow users to define daily lifestyle factors that may negatively affect sleep.

The Sleeptracker Elite sleep phase watch offers a stylish design that is simple and easy to use:


The Sleeptracker Elite uses a small accelerometer to monitor lateral motion associated with specific sleep phases. Each event is recorded and stored in the watch's internal memory. Once you have installed the Sleeptracker Pro software, use the Sleeptracker USB download cable to save each night's data. The included software lets users track trends and record daily factors that affect your personal sleeping habits: Napping, Eating Late, Drinking, Caffeine, Smoking, Exercise, Stress, Noise, Light, and Heat/Cold.

The Sleep Phase Monitor records how many restless or light sleep periods occur at night and allows you to get a trended picture of sleeping habits. Sleeptracker identifies five sleep cycles: Stage 1-4 and Stage 5 also known as REM or (Rapid Eye Movement). A typical sleep cycle takes 90-110 minutes. During Stage 1 of your sleep cycle, you sleep lightly. At Stage 2, your sleep gets progressively deeper. At Stages 3 and 4, also known as "Delta Sleep," you sleep most heavily; this is when your body rebuilds itself. Sleeptracker Elite monitors these sleep cycles and waits for the ideal waking moment such as a Stage 1 or 2 cycle. At which point, the Sleeptracker Vibrating Alarm begins beeping and vibrating to gently wake you from sleep.

Sound, by itself, is sometimes not enough to wake up in the mornings. Realistically, it takes very little stimulus to wake a person at the optimal time. Sleeptracker has found that people experience their best morning when awoken during Stage 1 or Stage 2 of their sleep cycles. Typical alarm clocks have no means of tracking what sleep cycle you are in. The Sleeptracker Elite records subtle movements associated to specific sleep cycles and waits until a light sleep cycle occurs during the alarm window. Set the alarm window to your typical morning wake-up time and Sleeptracker will attempt to wake you within a range as wide as 90 minutes from your wake up time. For example, a 20 minute window setting for a wake up time of 6:30 would allow the Sleep Phase Monitor to start the audible and vibrating alarms at the most optimal awake state between 6:10 and 6:50.
How to install the Sleeptracker Pro software

The Sleeptracker Pro software allows users to download each night's sleep data so that you can build a history of your sleep and identify factors that may be affecting your sleep. Sleeptracker will only install on computers using Microsoft Windows. To install, insert the included CD-ROM into your computer's CD drive. A prompt will appear, asking which language you wish to use and then the instillation will begin immediately. After the installation process, a prompt appears "Completing the Sleeptracker Set-up Wizard." The boxes boxes beside "Launch USB Driver Installation" and "Launch Sleeptracker" will be checked; do not uncheck these boxes. Click "Finish" and the software will open. Your computer will not recognize the Sleeptracker device unless you install the USB drivers.

How to download sleep data from the Sleeptracker watch

Make sure Sleeptracker Pro software has been installed and is running on a personal computer running Microsoft Windows. Now connect the included USB cable to your PC and set your Sleeptracker to the DATA screen, where it will remain for two minutes. Connect the watch to the USB cable by placing the three-prong clip onto the back of the watch, where three small indentations that match up with the clip prongs. Once connected, open the software and click on the "Add Sleep Event" button. MAKE SURE THE WATCH IS SET TO THE DATA SCREEN. If the USB cable is connected properly, you will see a "Ready" prompt; otherwise, you will see "Sleeptracker device not found". Adjust the cable and repeat.

If not completely satisfied with the product, the manufacturer offers a 30 day money back guarantee. Simply contact CPAP.com for Return Authorization and instructions within the first 30 days of purchase.

To review your sleep data, press MODE until you reach DATA REVIEW. On the screen will appear "Data 1" and the time of your first "almost-awake" moment during the previous night's sleep. Press the left buttons to scroll through all of your almost-awake moments ("Data 2," "Data 3," etc.). As you reach the end of this series of times, Sleeptracker displays "Data A," which stands for "Data Average": the average time-period between your almost-awake moments.

For example, if you sleep for eight hours and have eight almost-awake moments during that period, the time of each of those eight moments will show up in the DATA REVIEW mode. At the end of that series of times, Sleeptracker will show that you had an almost-awake moment every sixty minutes.

On the next night, Sleeptracker might show that you had seven almost-awake moments during the eight hours you slept, indicating that you slept more soundly than you did when you had eight almost-awake moments. If, on the other hand, you had fifteen almost awake moments that night, you probably did not sleep as well. Perhaps you had a change in diet, went to bed at a different time, or were under unusual stress. After reviewing several nights' worth of almost-awake moments, you can adjust the factors that may be affecting your sleep to improve your chances of sleeping soundly and waking up refreshed.
How will my sleep data be affected if I get up to use the restroom or to check something in the middle of the night?
Because many of us wake up or get up during the night, Sleeptracker is designed to record data only when you are asleep. Its internal sensors can detect when you are up and moving around. Therefore, if you get up at 2:00 AM and go back to bed at 3:00 AM, that hour when you were up will be recorded as a single "almost-awake" event at 2:00 AM. Similarly, if you toss and turn for a while during the night, that tossing-and-turning period will be recorded as a single event, and Sleeptracker will stop recording your data as long as you are awake. Once you have settled back to sleep, Sleeptracker automatically returns to data-acquisition mode.
What is Sleeptracker monitoring?
Sleeptracker looks for and records brief periods of movement that are associated with almost awake moments or very light stages of sleep. You can review your almost awake moments the next day by pressing MODE to go to DATA REVIEW. Sleeptracker will show a series of times indicating your almost-awake moments throughout the night (shown as "Data 1," "Data 2," etc.). At the end of this series, the average time between your almost-awake moments will appear as "Data A."
What is DATA A?
"DATA A": The Average Time Between Your Almost-Awake Moments

After you've reviewed your almost-awake moments in DATA REVIEW, at the end of this series of times, Sleeptracker displays "Data A," the average time between your almost-awake moments. Data A can help you know how soundly you're sleeping. If you go to bed and get up at the same times most days, your sleep patterns are likely to be consistent—and Data A will remain fairly consistent, too. Keep track of Data A for 7-10 nights to establish your personal baseline. If your sleep is consistent, Data A will probably only vary by a few minutes from one night to the next. If Data A deviates significantly from your normal baseline one night, try to think about what you did before going to sleep that might have affected your sleep cycle. Factors like alcohol, cigarettes, late evening exercise, late night eating, and spicy foods can all affect your Data A.
How tightly should I wear my Sleeptracker?
Wear Sleeptracker as you would a regular wristwatch. It should be snug enough to allow adequate contact with your wrist (not so loose that it moves around), but not tight enough to be uncomfortable.
Will Sleeptracker make me sleep better?
No. Sleeptracker can be used to track your sleep patterns to see how soundly you sleep, but it cannot control the factors that affect your sleep. It is the user's responsibility to control or change those factors.
Is Sleeptracker a medical device?
No, Sleeptracker is not a medical device and should not be used to treat sleep disorders. Anyone who suspects that he/she has a medically diagnosable sleep disorder should consult a physician.
Can I use Sleeptracker to shorten the amount of sleep I get?
No, you should not use Sleeptracker to shorten your regular night's sleep. Physicians recommend getting an average of 8 hours of sleep per night.
Overall Rating 1.0 1 Review
5 0
4 0
3 0
2 0
1 1
Verified Customer
Verified purchase
2010-08-17
Did not Work

I was excited about this product, but I could not get it to generate any data. I went to the company's website and tried their "test procedure" and that didn't work either. Apparently it's just a device that measures if you move and then it might wake you. If you don't happen to move during your set "wake up window" it will not sound or vibrate until your latest wake time. I already have that feature in my alarm clock. I was very disappointed - maybe it does work for some folks, but not for me.