Up All Night: How All-Nighters Impact Your Health

Consistent sleep deprivation poses major health risks: Individuals who accumulate significant “sleep debt” are more likely to suffer from a range of chronic illnesses. If we neglect our rest on an ongoing basis, we stand to undermine our quality of life and jeopardize our long-term well-being.

But how risky is the occasional sleepless night, undertaken only in special circumstances? After all, people sometimes stay up all night due to looming deadlines, unplanned emergencies, or extended partying. For the average person, could these isolated all-nighters cause serious problems?

We surveyed over 2,600 people about their experiences with all-nighters, studying their reasons for staying awake and the methods they use to do so. We then analyzed the consequences of their sleepless nights, from emotional challenges to impaired cognitive performance. What are the real risks of pulling an all-nighter, and are they worth the price we pay? Keep reading and decide for yourself. 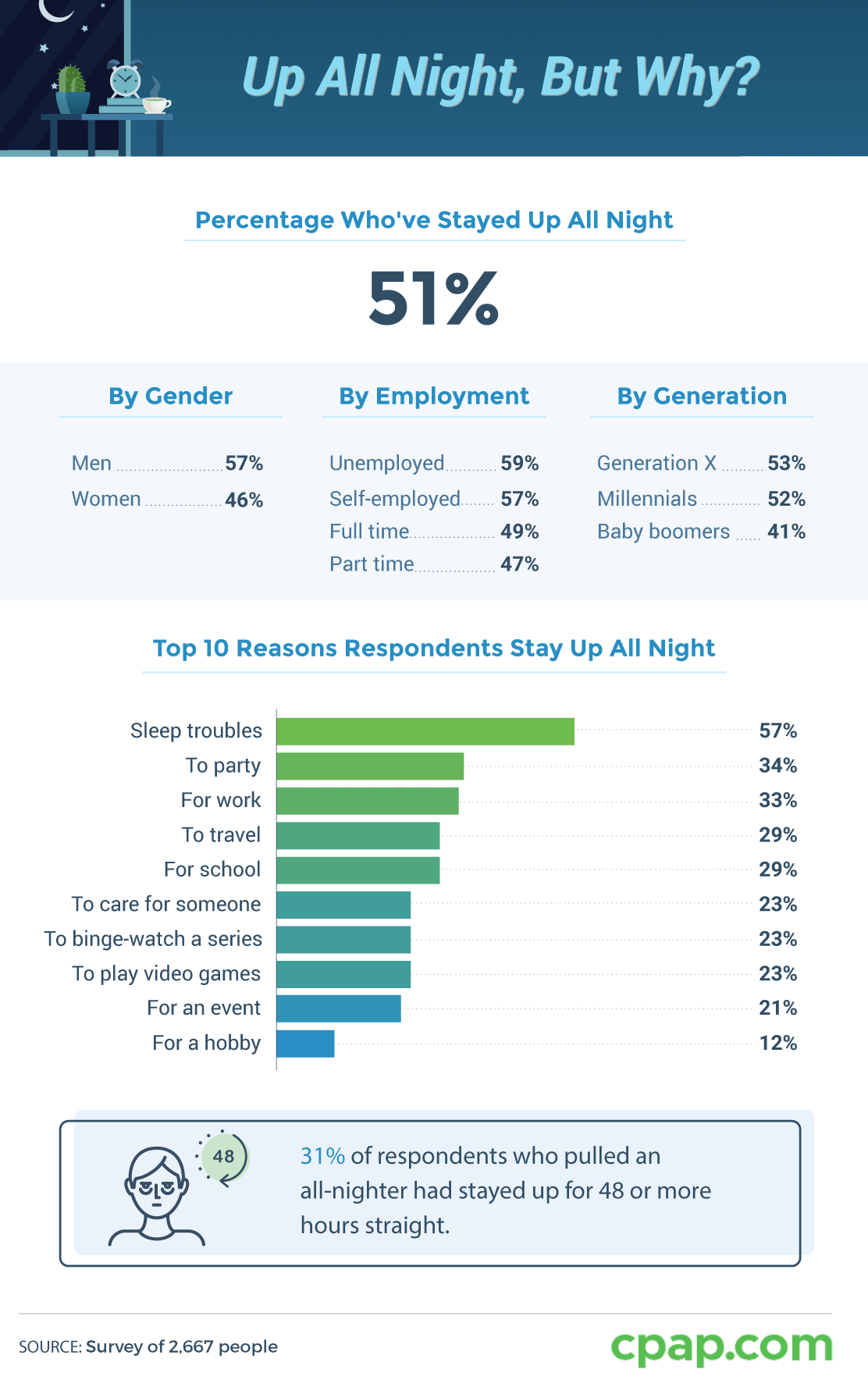 Among our respondents, more than half had pulled an all-nighter at least once. But if sleepless nights were fairly common overall, intriguing demographic differences surfaced. Men were more likely than women to report pulling all-nighters, and they did so most often for work-related reasons. Among female respondents, sleep troubles were the top all-nighter cause. This may not come as a surprise to those who know that sleep disorders, such as insomnia, are more common among women.

Unlike the most common reason, the second-leading cause of all-nighters was due to celebration and not obligation: Over a third of respondents said they partied through the night. As drowsiness is one of alcohol’s known effects, these respondents likely fought off fatigue throughout their outing. Travel was another common all-nighter cause. Sleeping in transit can be challenging, but many people also force themselves to remain awake until they can align their sleep patterns with their new time zone.

Whatever their reasons, a certain subset of our respondents experienced prolonged sleepless periods. Of those who had pulled an all-nighter, nearly a third reported staying up for 48 hours or more. According to experts, going this long without sleep can compromise immune system function and precipitate brief periods of involuntary dozing called “microsleeps.” 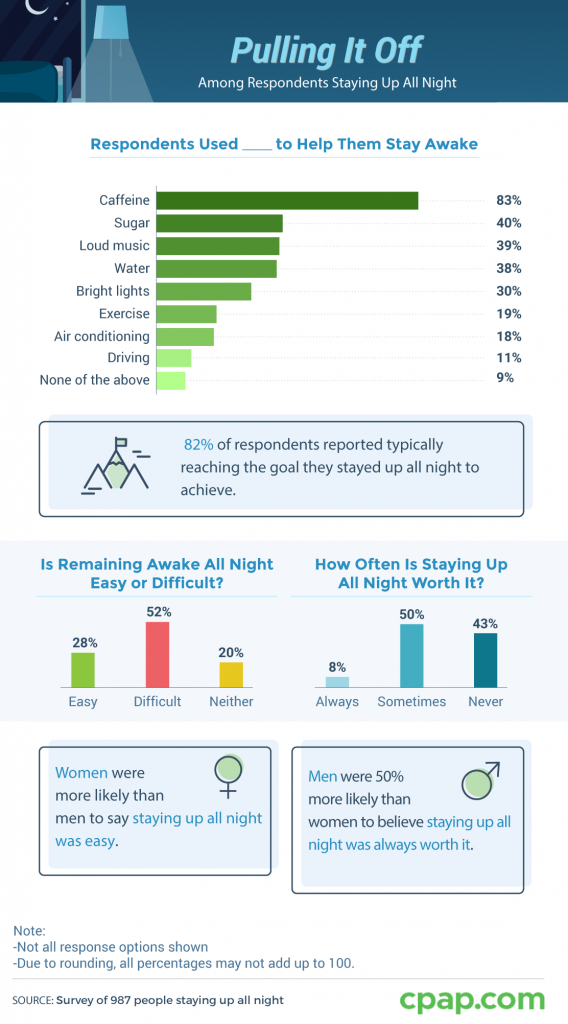 Among respondents who had pulled all-nighters, the most popular tool was a classic: caffeine. Eighty-three percent had used caffeine in some form to stay awake – although experts warn the inevitable crash can actually derail all-nighters. Similarly, 40% consumed sugar to stay alert, whereas protein-rich snacks might offer more sustainable energy. Other people relied on energizing stimuli: 39% played loud music, while 30% employed bright lights.

Whichever methods they used, most people were successful: Of respondents who set out to stay up all night, more than 4 in 5 said they had achieved the goal they pulled an all-nighter to achieve. But these all-nighters often require considerable effort. Fifty-two percent described staying up as “difficult,” although women tended to have an easier time resisting the urge to rest.

Moreover, the rewards for these sleepless nights are often underwhelming. Just 8% said all-nighters were always worth it, while 43% said they were “never” worth the effort required. Interestingly, men were far more likely than women to regard their all-nighters as worth it. Recent research suggests that sleeplessness may impact men and women differently, with women experiencing more significant declines in working memory. If this is the case, it makes sense for men to take a more positive view of all-nighters’ costs and benefits. 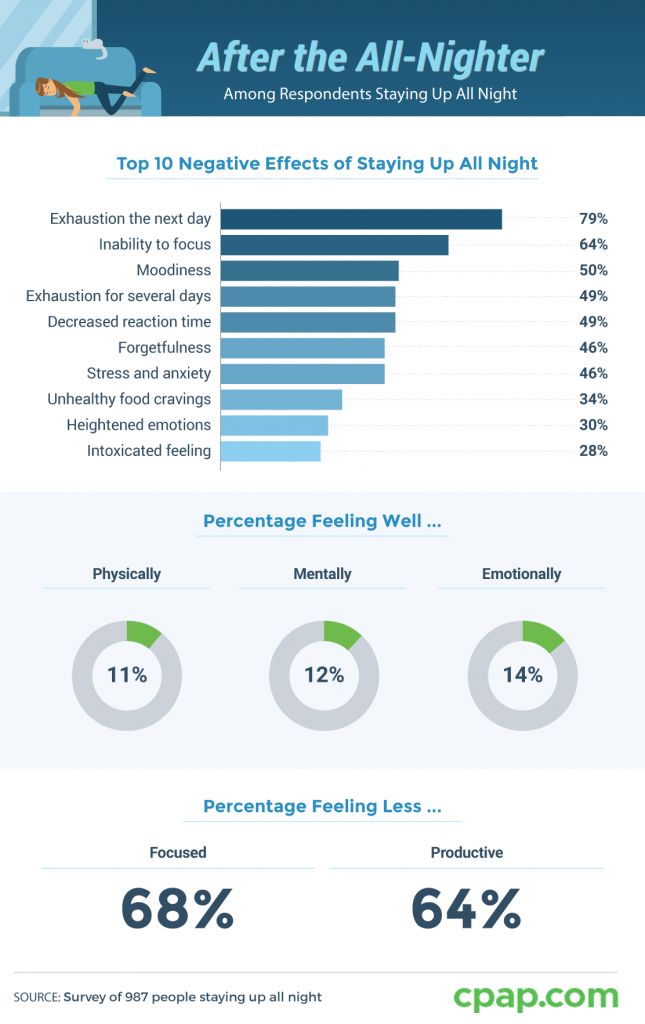 There’s a price to pay for staying awake, and the consequences extend beyond the exhaustion that 79% of respondents reported. All-nighters are associated with impaired cognitive performance, particularly in terms of attention and memory. Indeed, 64% reported an inability to focus, while 46% felt forgetful.

Fatigue also has profound implications for how we experience the world around us, making us more reactive to environmental stressors. Fifty percent felt moody, and nearly as many reported stress and anxiety. Thirty percent described a general sense of heightened emotionality, and women were especially likely to feel this way. In fact, women were particularly susceptible to the majority of the all-nighter side effects studied.

In light of these symptoms, just 11% felt physically well in the aftermath of their all-nighters. Moreover, only 12% felt mentally well, and merely 14% claimed emotional wellness. For some, these concerns are quite grave: People with mental health disorders often find that sleeplessness can precipitate or exacerbate their symptoms.

In terms of mental acuity, roughly two-thirds of people felt less focused and productive after pulling an all-nighter. These findings beg an important question: If you’re preparing for something important, will staying up actually impede your performance overall? 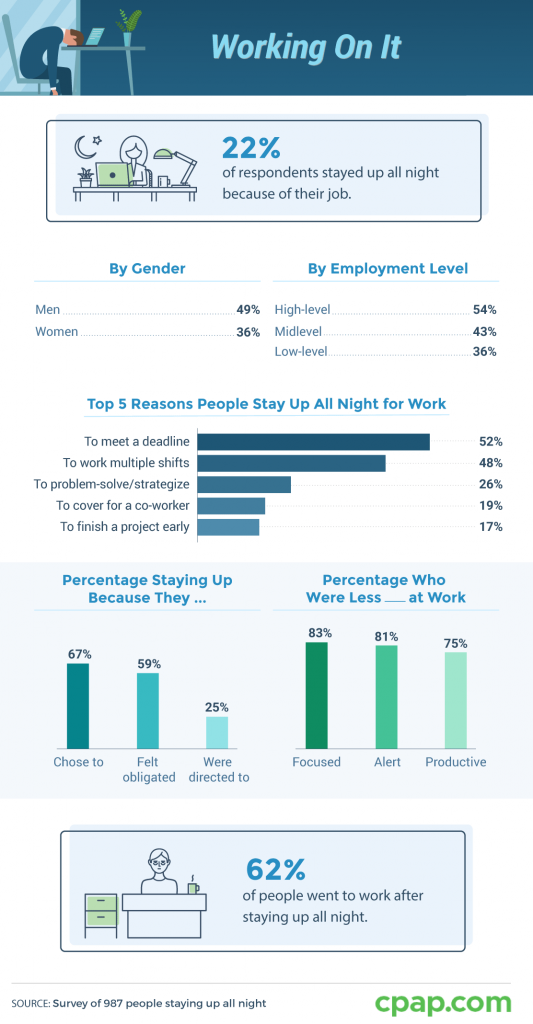 Of all our respondents, 22% had pulled an all-nighter for professional purposes. And while all-nighters were most common among high-level workers, those with less powerful roles often stayed up as well. Fifty-two percent did so to meet a looming deadline, while 48% stayed awake to work multiple shifts. In some professions, such as law enforcement and medicine, marathon shifts are alarmingly common.

Are these work-related all-nighters a matter of choice or pressure from employers? Respondents reported mixed motivations. While 67% said they pulled an all-nighter because they chose to do so, 59% stayed up all night due to an obligation. Another quarter said a superior had directed them to work through the night–yet employers are not obligated to pay extra for night work.

Most of these employees did not have the following day off: 62% went to work the next day. Predictably, their performance suffered, with the majority feeling less alert, focused, and productive after an all-nighter. Studies show that employee fatigue costs U.S. businesses hundreds of billions of dollars a year in lost productivity. By encouraging or allowing all-nighters, many companies may actually be contributing to this challenge. 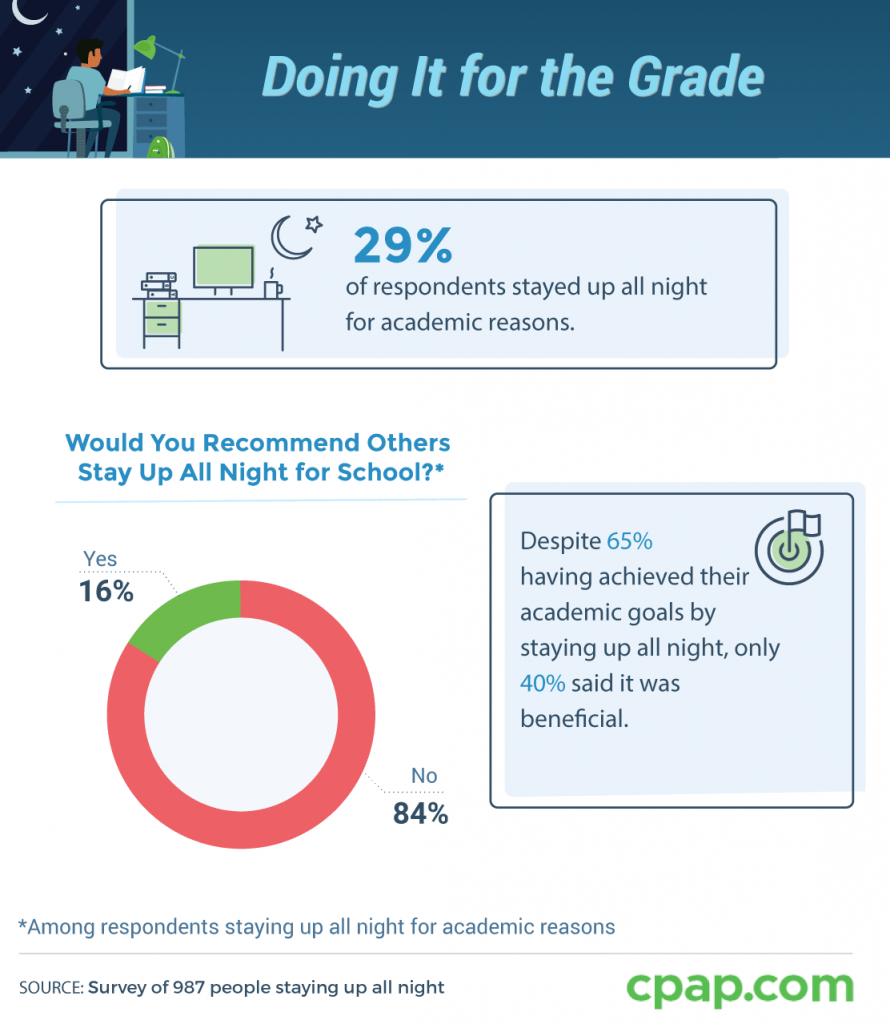 To some, late nights in the library can seem like an essential part of the college experience. Indeed, 29% of all respondents said they stayed up for reasons relating to school. One recent study even found that 20% of current college students pulled an all-nighter at least one weekday per month.

But while sleepless study sessions are relatively common, most respondents viewed them poorly in retrospect. Just 16% said they’d recommend that others follow their example and stay up all night for school. And while 65% said they achieved the academic goals associated with an all-nighter, fewer felt staying up actually helped. Just 40% said staying up all night was beneficial to their academic performance.

These doubts are bolstered by research: Multiple studies suggest that heading to bed may be the better bet. While cramming may provide a sense of preparation, students typically perform better when they stick to consistent sleep schedules.

As our results make quite clear, all-nighters are not confined to the college life. Adults of all ages go sleepless for a number of reasons, ranging from professional pressure to intense partying. Additionally, many people are simply unable to sleep, lying awake for whole nights at a time. And because all-nighters are common across demographic groups, we should all reckon seriously with their potential pitfalls.

Before pulling an all-nighter, consider the symptoms reported by our respondents – no matter how important your immediate goals may be. Are you willing to accept several days of exhaustion or an array of negative emotions? More practically, will the all-nighter even prove beneficial, given how your performance may suffer subsequently?

If you’re staying awake unwilling, however, you need to ask another set of questions entirely. Do you have an underlying sleep disorder, and which tools or lifestyle adjustments might help? We highly recommend raising these subjects with your doctor, who can advise on appropriate solutions. And if a CPAP machine is part of your treatment, CPAP.com is here to help with resources and products of the highest quality. After all, all-nighters should only be a last resort and not a persistent affliction.

In some cases, questions and answers were rephrased or condensed for brevity or clarity. These data rely on self-reporting, and strict statistical testing has not been performed. Our margin of error was 3% with a 95% confidence interval. To ensure respondents took our survey seriously, all respondents were required to identify and correctly answer a decoyed attention-check question.

Know people who pull all-nighters a bit too often? Feel free to share our findings with them or any other audience who might be interested in this project. When it comes to using our images and information, we have two rules. First, please link back to this page, allowing others to enjoy the full project. Second, use this work only for noncommercial purposes.