Everyone needs to go on vacation. Unfortunately, many who would likely benefit from a trip are forgoing their sought-after R&R time due to the added stress of traveling with a sleep disorder. Vacations can prove to be challenging for someone with poor sleep health on their own when they are meant to be an escape and relief. Between dealing with symptoms and explaining CPAP equipment to loved ones or friends, some people may struggle with taking overnight trips. Even people with good sleep health can still be affected by travel-related sleep loss such as jet lag, which can increase the risk of insomnia and sleep interruptions.

In a survey of over 1,000 people who had gone on an overnight vacation in the past year, half of whom had a sleep disorder, we sought to uncover the extent to which sleep disorders impact sleep quality and other aspects of vacationing. Continue reading to learn more.

Sleep Disorders and Their Impact on Sleep 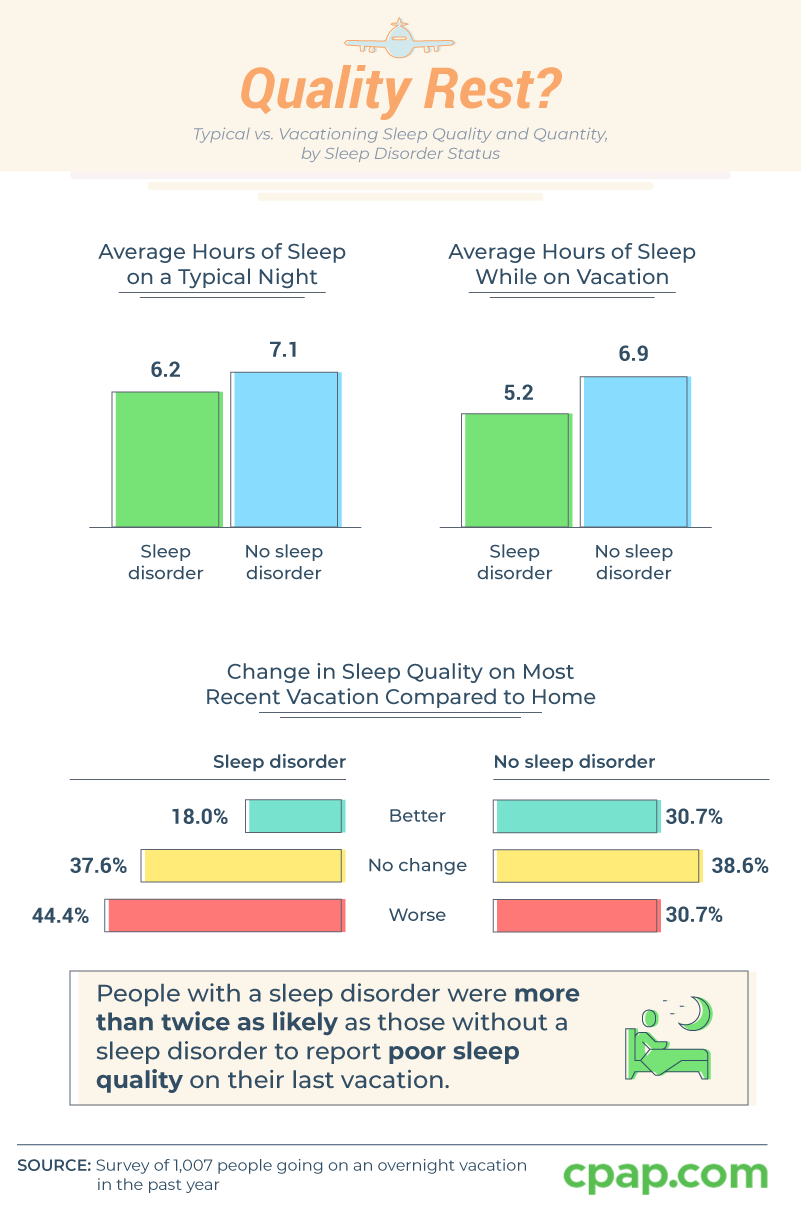 Although we hope that vacations (and their distraction from everyday life) can be enjoyed by those with a sleep disorder, we uncovered a sobering finding: Survey participants with a sleep disorder were more than twice as likely to report having poor sleep quality while on vacation.

On average, respondents with a sleep disorder slept one hour less while on vacation compared to at home (6.2 hours at home versus 5.2 hours on vacation). When we sleep in a new or unfamiliar place, our bodies tend to fall into the first-night effect (FNE), where half of our brain remains in an active state trying to acclimate to the new surroundings. Our bodies refuse to fully shut down, reducing someone’s chances of proper shut-eye.

Overall, many characteristics of travel can inhibit sleep functions, which may only exacerbate preexisting conditions. Survey participants with a sleep disorder were far more likely to experience worse sleep: Over 44% of people with a sleep disorder claimed worse sleep while on their most recent vacation, and only 18% reported better sleep quality.

Respondents with a sleep disorder were also twice as likely to feel exhausted during their last vacation compared to those without a sleep disorder. Sleep disorders can definitely interrupt schedules, as shown in the account below from one of our survey participants. 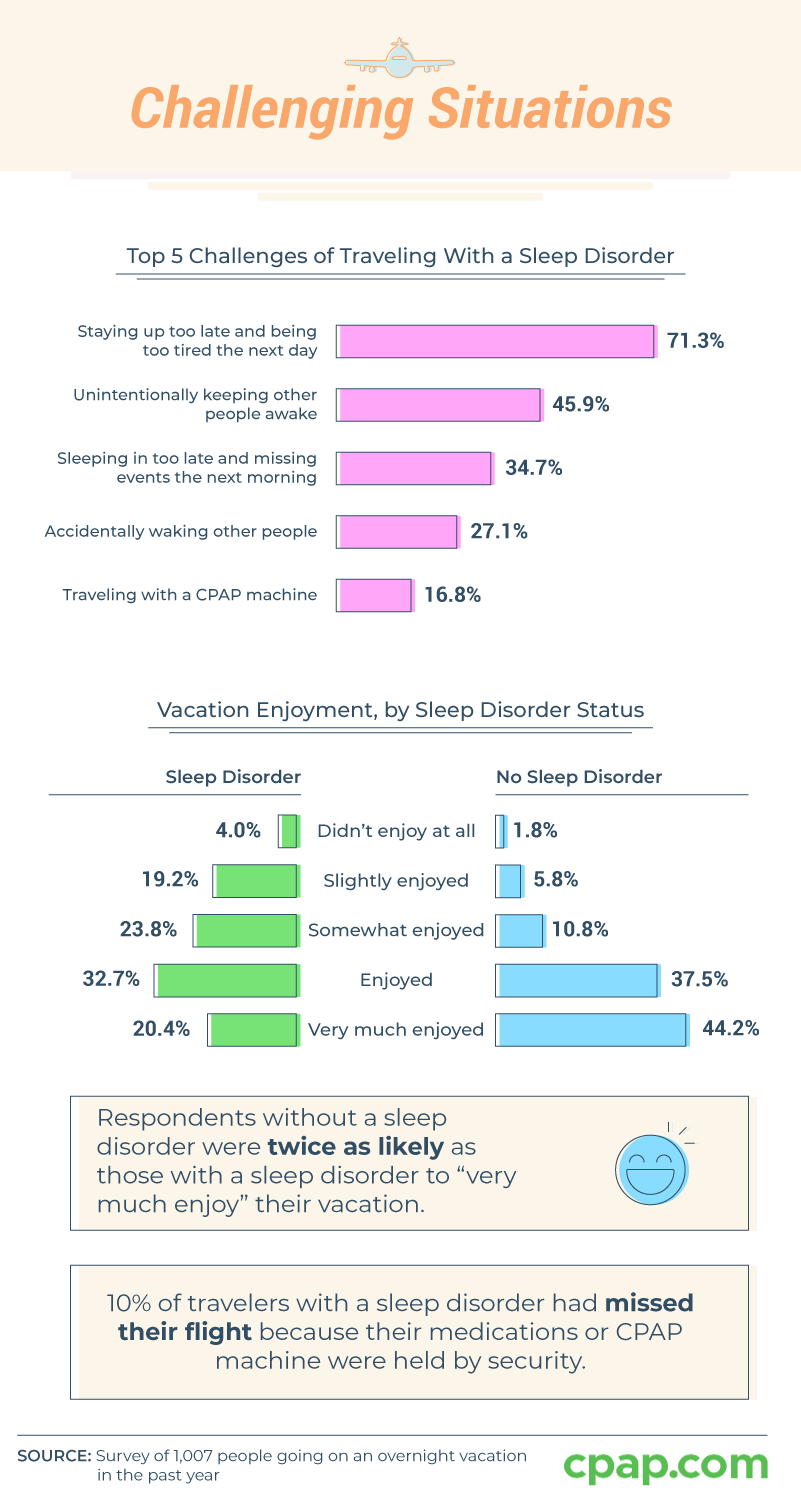 The effects of lost sleep extend well into the daytime: Over 71% of respondents with a sleep disorder missed out on the next day’s activities because they were too tired, and more than 34% reported oversleeping through the next morning’s plans. Missing out on valuable sleep can lead to a person developing hypersomnia, or the inability to stay awake during the day, in conjunction with other sleep disorder conditions.

Other top difficulties that arose when traveling with a sleep disorder, as reported by our survey participants, included unintentionally keeping those in shared rooms awake (46%), waking someone up (27%), and transporting CPAP equipment (17%).

Dealing With a Sleep Disorder 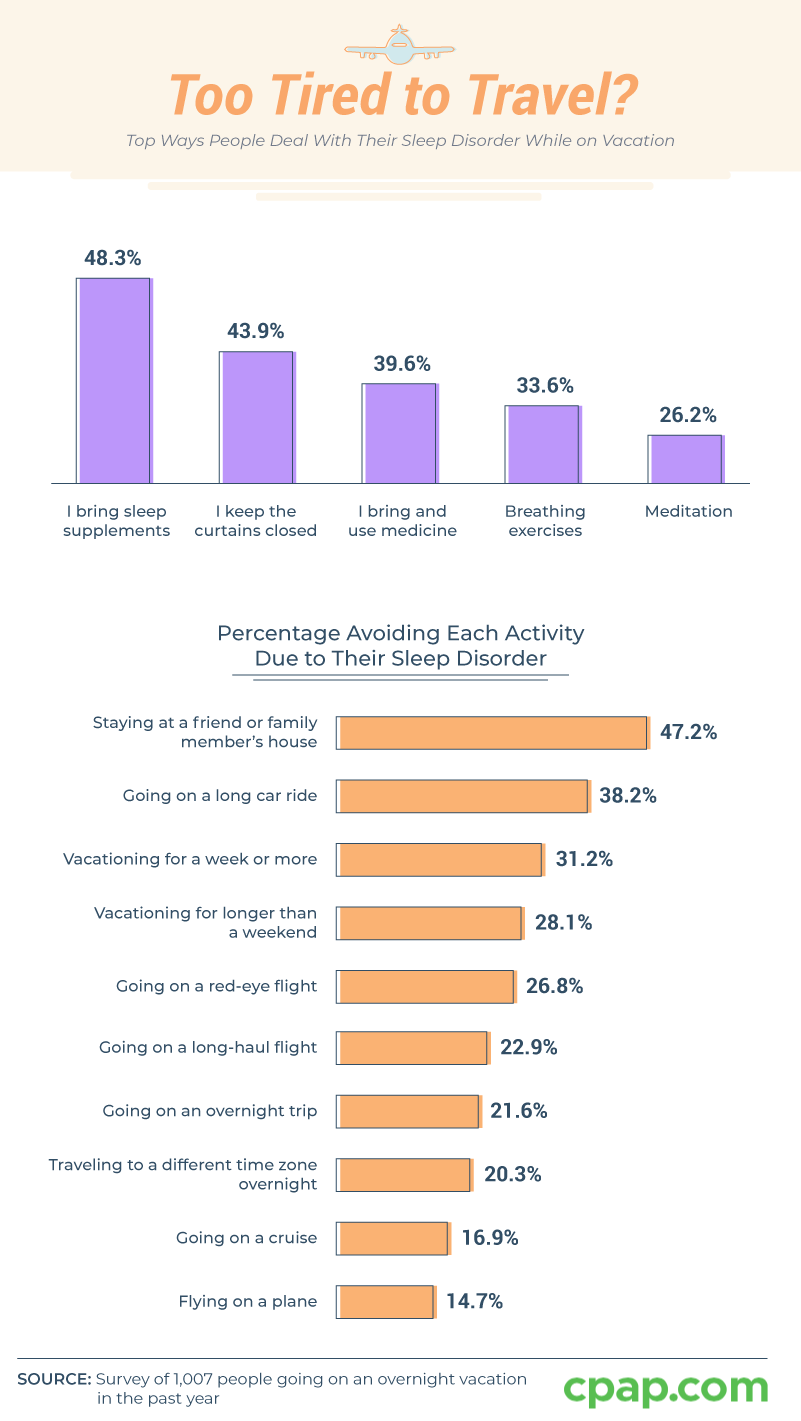 To achieve better sleep during vacation, those with a sleep disorder may try to avoid triggering their symptoms. Most commonly, over 47% of respondents avoided staying with a family member or friend due to their sleep disorder. Long car rides or flights also present issues to people who deal with sleep disorders (and even those without), since extended travel can take a toll on the body’s natural sleep cycle.

People with a sleep disorder often feel their symptoms inconvenience or are too much of a burden on loved ones. However, loved ones typically are ready and willing to offer support. Since the underdiagnosis of sleep disorders is so prevalent, opening up to loved ones about your condition and accepting help, especially while on vacation, will prove to be a much more positive experience for everyone. 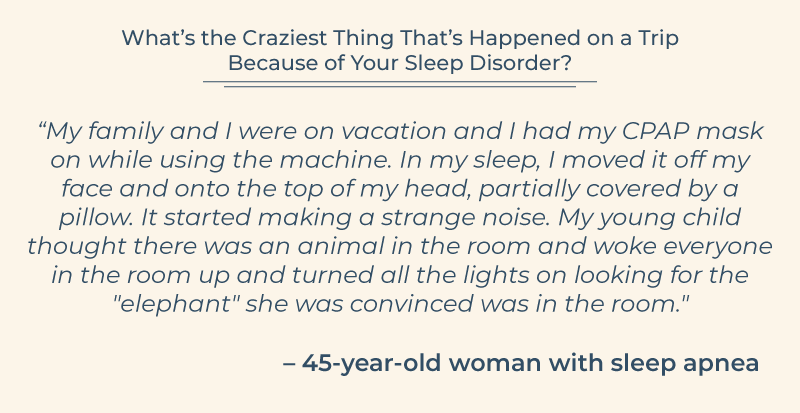 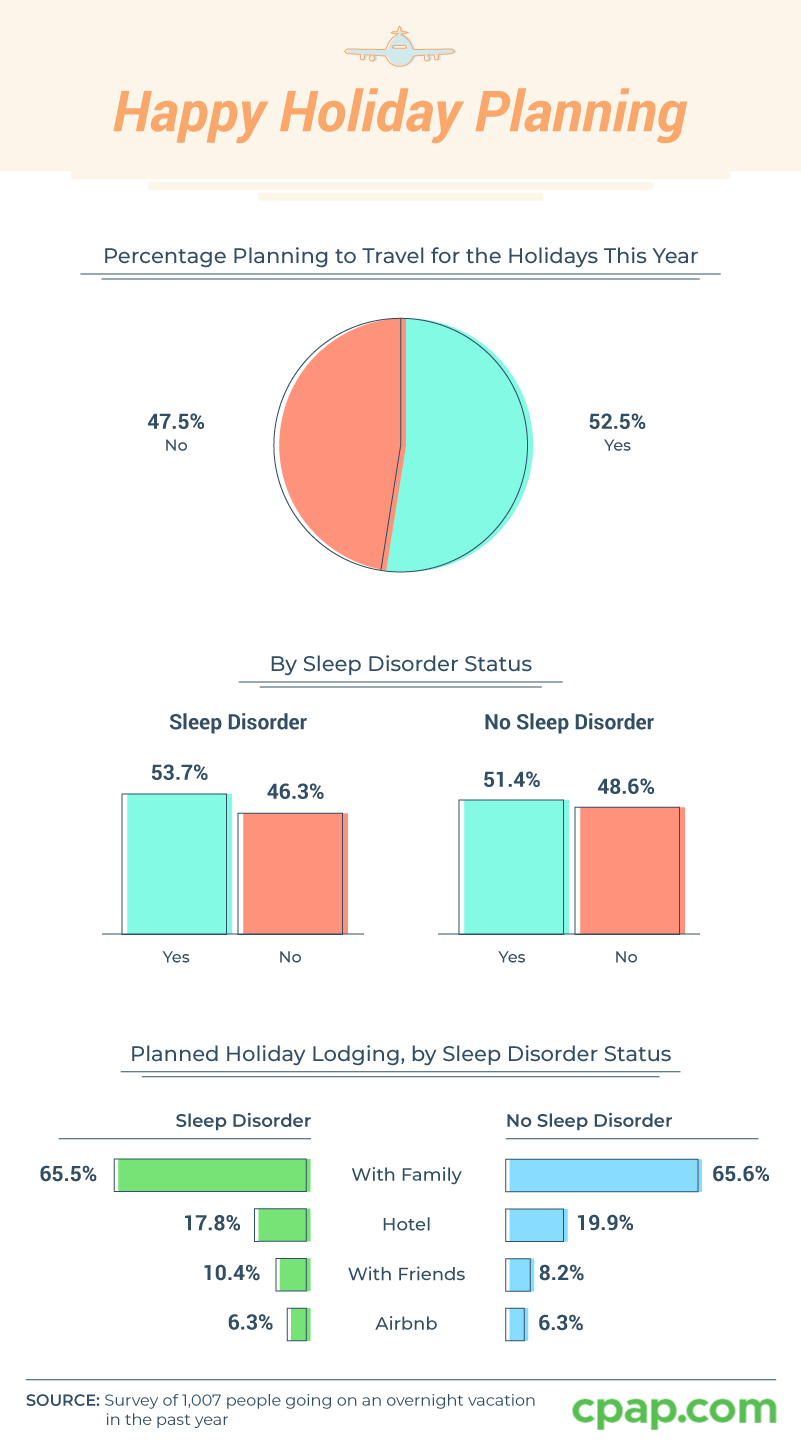 Over 54 million people were predicted to have traveled for Thanksgiving in 2018. As people flock to social gatherings and celebrations throughout the year, those with a sleep disorder may have more to consider than the average person.

And roughly the same percentage of people surveyed said they would stay with family, regardless of whether they had been diagnosed with a sleep disorder.

Traveling makes it tough to get quality sleep, even for people without a sleep disorder. However, vacations can be uniquely challenging for those with sleep problems.

Have you been diagnosed with sleep apnea or another sleep disorder, and you’re not sure what to do? Head over to CPAP.com for expert advice and recommendations for sleep apnea therapy options and equipment.

All data presented in the above study were gathered through the use of Amazon’s Mechanical Turk service. A total of 1,007 people were surveyed, including 558 women, 446 men, and three people who chose to identify as neither. 505 respondents self-identified as having at least one sleep disorder, and 502 identified had none.

To qualify for this survey, respondents had to have been on at least one overnight vacation in the past year. Respondents were included in the category of having a sleep disorder if they selected they had a self-diagnosed or medically diagnosed sleep disorder. To determine sleep quality, respondents were asked to rate their quality of sleep when their partner wasn’t in bed and then asked to rate their quality of sleep when they were at home vs. on vacation. They were presented with the following scale for both questions:

Based on this order, we were able to determine if one scenario resulted in better, worse, or the same sleep quality. For example, if someone said their sleep quality was “excellent” without their partner but “very good” with their partner, this was considered “worse,” while still a positive sleep quality.

All data presented in the above study rely on self-reporting, which can be host to issues like telescoping and exaggeration. An attention check was used in the survey to guarantee that only participants who paid full attention and took the survey seriously were allowed to move forward.

Since sleep disorders can hinder the vacation experience, it’s possible some people haven’t taken a trip in a long time. Share this information with loved ones and followers because you never know who might be encouraged to take a much-needed trip. Mention CPAP.com when citing our findings, and please share for noncommercial purposes only.