Sleep disorders do not single out one type of person. Instead, they affect the lives of an estimated 22 million people in the United States, with approximately a third of adults across North, Central, and South America likely experiencing symptoms. It impacts all genders, races, and income levels, not even sparing celebrities such as NFL legend Reggie White and actress Carrie Fisher, who captivated audiences as Princess Leia in the “Star Wars” franchise.

Fisher’s loss highlights the dangers that sleep apnea can pose to our health, regardless of our financial situation or physical qualities.

To explore what may lead to sleep apnea, we analyzed data from the Centers for Disease Control and Prevention’s (CDC) Behavioral Risk Factor Surveillance System (BRFSS), the “largest continuously conducted health survey system in the world,” which boasts over 400,000 phone-based interviews per year to uncover health insights among people nationwide. We specifically focused on sleep apnea and observations of halted breath during sleep.

Is sleep apnea most likely to affect certain populations, such as men and women, differently? Can we observe any relationship between income and the sleep disorder? Which habits and activities relate to sleep disorder presence? Learn how you fit into the conversation with our full findings below.

Sleep disorders do not discriminate, affecting individuals that cross gender, race, and other demographic lines: nearly one in five (18%) of people were observed to suffer from sleep apnea, representing a large percentage of the total U.S. population.

BRFSS data showed men, overall, are more likely to have sleep apnea: 23% of men and 14% of women were observed to have stopped breathing during sleep. One explanation for this variance might have to do with the underrecognition of symptoms in women. Women have historically been underdiagnosed for sleep apnea in part because they show different symptoms than men, are commonly misdiagnosed, or are less likely to come forward with their symptoms.

Recent medical breakthroughs have shed light on how men and women experience sleep disorders. Brain scans conducted by UCLA revealed that women who are diagnosed with sleep apnea have thinner superior frontal lobes than men, which may cause sudden and severe interruptions and malfunctions in autonomic nervous system functions such as breathing. This condition is called complex sleep apnea (CSA), and its symptoms are addressed with a specific machine known as a Bilevel Positive Airway Pressure, or BiPAP, machine that assists with replicating the breath cycle because they need help with breathing in and out.

Regardless of gender, a relationship between snoring and sleep apnea can be observed, but there is a caveat: the prevalence of snoring does not automatically mean someone has sleep apnea, and vice versa. In fact, only 32% of people who snored were observed to have stopped breathing during sleep.

If you or someone you know is snoring at night, let them know. The snoring could be totally innocuous, but it’s better to be safe rather than sorry. 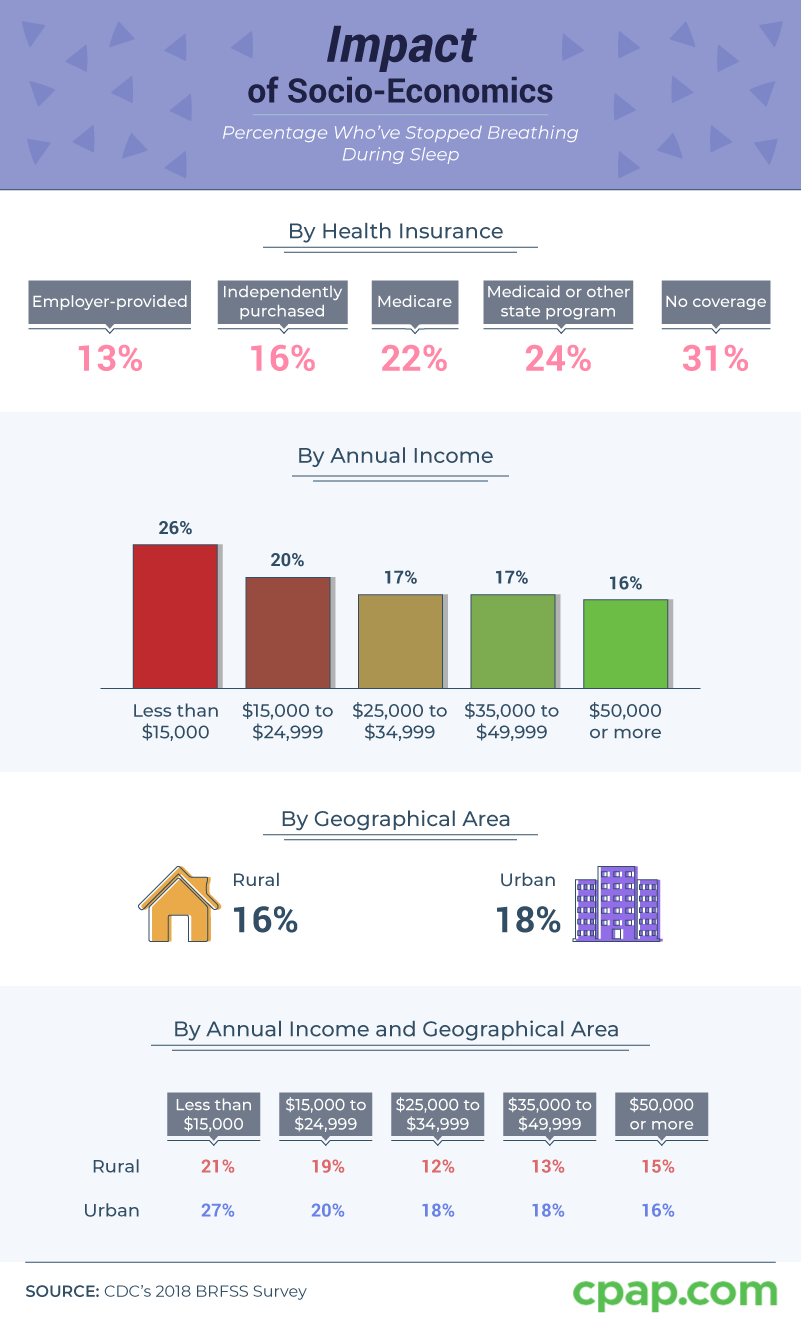 It appears there may be a connection between income and health issues. According to the BRFSS, people with lower incomes, those living in urban areas, and people without health insurance were more likely to suffer from sleep apnea.

In fact, 31% of people without insurance were observed to have stopped breathing during sleep, compared to only 13% of respondents with coverage through their employer. Among men, 40% without health coverage had been observed experiencing sleep apnea, compared to 25% of women without coverage.

Sleep disorders such as sleep apnea affect how productive someone is during waking hours as much as it interrupts someone’s sleeping cycle or impedes on someone’s sleep health. Employment is a known challenge, as sleep loss makes it difficult to keep a job or follow a consistent work schedule.

Since people earning higher incomes are more likely to have employer-provided insurance, wealth impacts preventative care and treatment. Having money might mean easier access to doctors, medication, and other factors that can help relieve sleep apnea.

Geographical factors may also come into play here: 27% of those making less than $15,000 a year while residing in urban areas were observed to stop breathing during sleep, compared to 21% of their rural counterparts. 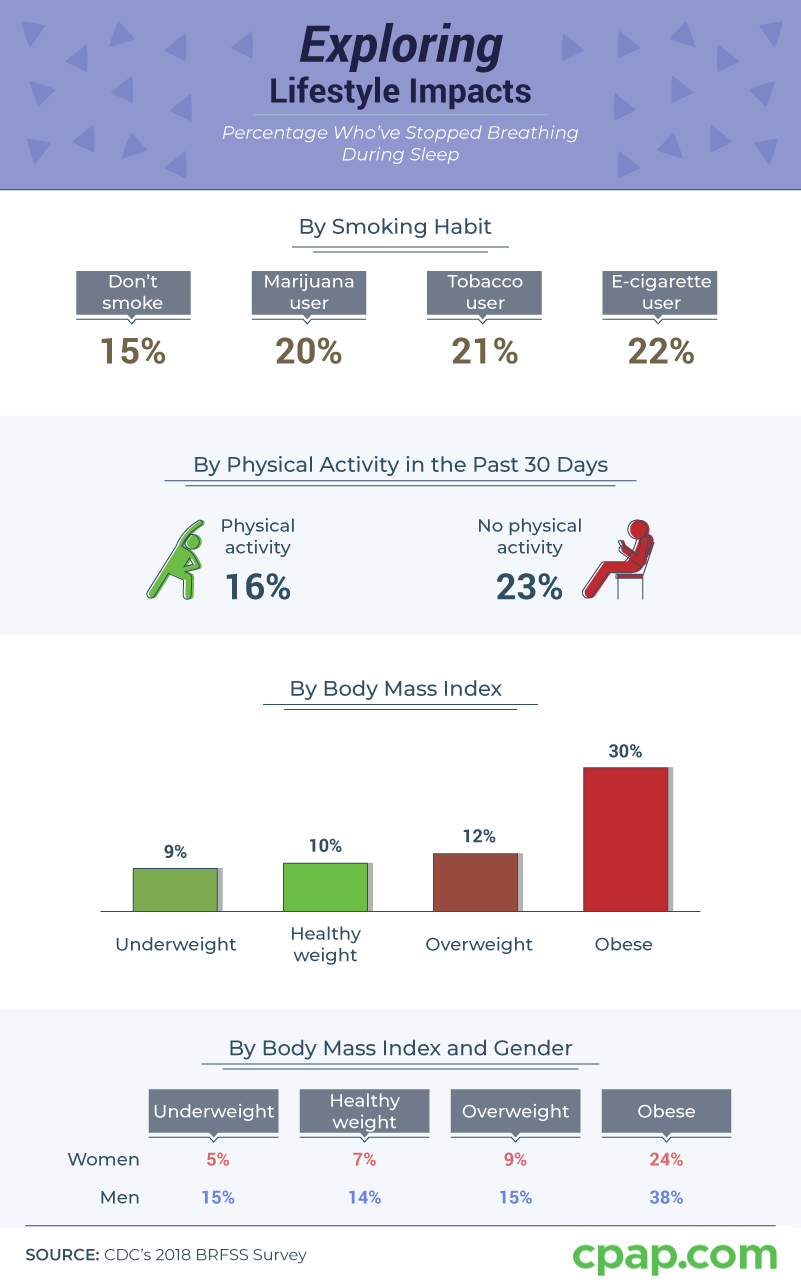 While there appears to be a correlation between weight and sleep apnea, it’s not the only factor.

Today, we know that sleep apnea can affect even active people. In fact, some professional athletes are two times as likely to suffer from sleep apnea, proving that the condition can impact anyone. While a lower level of athletic activity correlated to a higher likelihood of sleep apnea, differences between men and women continued to manifest – even men who engaged in regular exercise were more likely to experience sleep apnea than women who didn’t exercise.

Research shows that sleep apnea may be accelerated by smoking, and BRFSS figures indicate a correlation between smoking (cannabis, tobacco, and e-cigarette products) and an increased chance of sleep apnea.

Another important factor to consider is the amount of sleep we get each night.

Sleep loss and sleep apnea have a cyclical relationship: Sleep deprivation is known to increase the risk of sleep apnea and suspended breathing can interrupt sleep, leading to sleep loss.

Sleep Apnea Issues Can Be Aided With CPAP Solutions

Sleep apnea can seem like an uphill battle, especially if you live alone and don’t have someone to observe your sleeping and breathing irregularities. Since nearly anyone can be affected by this disorder, educating yourself on the symptoms and consulting with your doctor about using a CPAP machine could help you to sleep more soundly.

Are you looking to learn more about sleep apnea? Take our personalized sleep apnea symptom quiz to provide resources and answers related to your experiences. Turn to CPAP.com for expert knowledge and expansive CPAP product offerings to meet your every need. Explore our wide range of CPAP machines, masks, accessories, hoses, and more.

To produce these findings, we analyzed data from the CDC’s 2018 BRFSS questionnaire. For this study, we collected, collated, and fact-checked the data manually, and no automated software or “scraper” was used.

To learn more about the BRFSS, you can visit cdc.gov/brfss/index.html.

With so many people affected by sleep apnea, it’s important to share this information far and wide. Feel free to share these findings, but do so for noncommercial purposes and cite us by name, please.