What Is the Relationship Between GERD and Sleep Apnea? 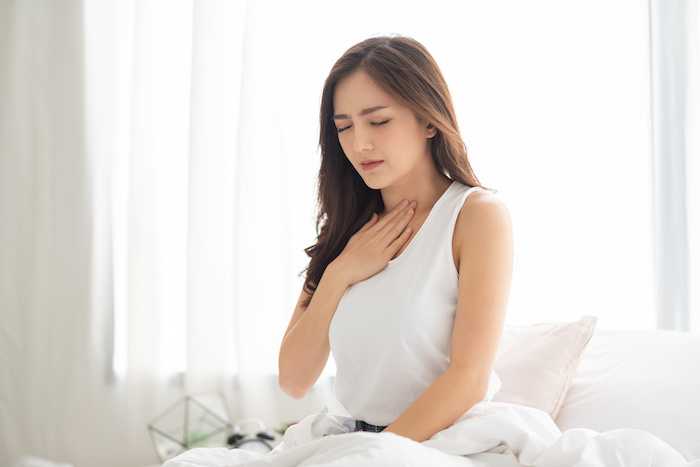 A good night’s sleep can be a precious commodity—especially for people with untreated sleep apnea, acid reflux, or both. When health conditions such as these routinely interrupt our sleep cycles (often multiple times a night), a downward spiral can result.

GERD (gastroesophageal reflux disease) and sleep apnea would seem to be completely unrelated conditions, except that they both disrupt sleep. But is there other information to consider in connecting the two?

The question, “are GERD and sleep apnea related?” is what we’re about to discuss here. First, though, let’s consider the two conditions independently.

What Is Sleep Apnea?

Sleep apnea is a sleep disorder in which breathing repeatedly stops and starts. It quite often disrupts restful sleep. It also is associated with and can exacerbate a variety of health concerns, including:

Since untreated sleep apnea interrupts sleep, which is the body’s way of restoring itself, this condition can cause other problems besides just those listed above.

At the bottom of the esophagus, where it meets the stomach, a sphincter (muscle serving as a valve) separates the two organs. The sphincter typically stays closed until a person swallows. Then, it opens for food to pass through and then recloses.

Acid reflux is often considered a mild version of GERD (gastroesophageal reflux disease). It occurs when the valve opens but shouldn’t. GERD is a chronic condition where the stomach contents flow into the esophagus repeatedly.

When this phenomenon, known as regurgitation, occurs, stomach contents (i.e. acid, digestive juices, enzymes, or food) can flow up from the stomach into the esophagus.

Is There a Link Between GERD and Sleep Apnea?

What’s the connection between GERD and sleep apnea? Anyone who suffers from GERD can confirm that it affects sleep. There’s nothing like waking during the night choking on caustic stomach acid to ruin a good night’s sleep.

But then, pets, kids, the phone, and many other things can interfere with your comfortable sleep, too, so we must note that GERD and sleep apnea are connected in a kind of “chicken and egg” relationship.

It’s unclear whether one of the two leads to the other or if their co-occurrence is a mere coincidence. However, there is a significant difference between the two.

If GERD burns the back of the throat, but sleep apnea causes the trachea to over-relax, it would seem the two are opposites, not complements. Yet, some researchers suspect that there is a causal link between GERD and OSA.

Most people with sleep apnea have OSA. But, is there a genuine connection between the two conditions? Investigations of OSA’s comorbidity (simultaneous occurrence) with GERD and various other health concerns are ongoing.

Are GERD and sleep apnea related? Given the amount of comorbidity to account for, we might never know for sure.

Research on GERD and Sleep Apnea

Research on this topic has been ongoing since at least the 1990s. In 2003, a research report presented the results of a study to the American College of Gastroenterology. It showed that patients with OSA had substantial nocturnal GERD (nGERD).

A 2010 study supported this by showing that around 60 percent of OSA patients studied also experienced GERD. However, other studies have questioned such a direct correlation between GERD and sleep apnea.

In the early 2010s, some researchers believed that OSA results in airway pressure changes that can cause reflux. Others believe that acid reflux can result in vocal cord spasms that can lead to sleep apnea.

Based on limited publicly available research findings, it appears that most research attempting to find a direct correlation between GERD and OSA tapered off in the 2010s.

Several studies brought up other comorbidity factors like smoking and obesity as mitigating factors. Since comorbidity is expected in the general population, especially among the elderly, it might not correlate directly.

Was the academic speculation about a link between GERD and sleep apnea a wasted effort? Only time will tell. Meanwhile, a related research line had been brewing: one connecting GERD with a standard OSA therapy.

CPAP (continuous positive airway pressure) therapy treats those with OSA as well as the other two sleep apnea types. CPAP machines use light air pressure to keep airways open. This process helps ensure that those passages don’t collapse during sleep.

Alongside the early studies trying to establish a GERD-sleep apnea correlation, there arose a sort of echo wave of research investigations probing the question of whether using a CPAP machine might also ease GERD symptoms.

A 2016 study showed that 62 of 79 patients (78%) with sleep apnea had acid reflux symptoms at the start of the research. Interestingly, the mean heartburn score decreased by 62 percent among those with sleep apnea who were strict users of their CPAP therapy.

In the same year, another unrelated study countered a prevailing notion that CPAP therapy actually causes acid reflux. Since then, most sources seem to agree that CPAP and GERD treatments (both medical and physical) work well in sync.

Are GERD and Sleep Apnea Related or Not?

This question appears to have fallen out of fashion in the medical research community. We suspect that this isn’t because that line of research was deemed unimportant but rather that a more promising problem to investigate emerged.

Discovering a possible CPAP connection with both OSA and GERD might have been a chance, but at least this technology seems to help some people living with both conditions.