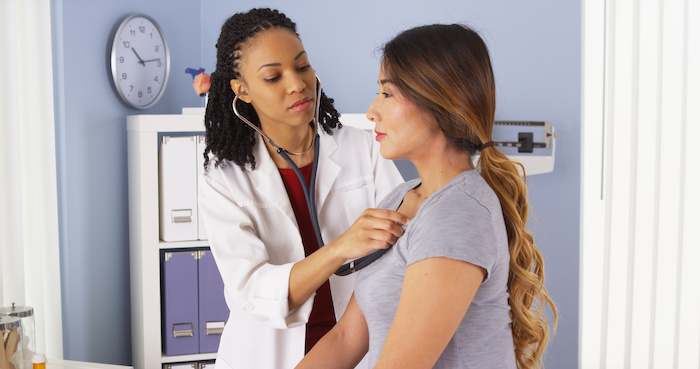 Did you know that about half of the people who have atrial fibrillation (AFib) also have Obstructive Sleep Apnea (OSA)?

Both conditions have to do with irregularities in continuous systems in the body. Atrial fibrillation is an irregularity in the heartbeat, and sleep apnea is a breathing irregularity that happens during sleep.

Knowing about the connection can help you understand how to reduce your risk for either of these conditions. It might also help you figure out your course of treatment.

We’ll walk you through how sleep apnea and AFib might be linked and what that could mean for you.

Can Sleep Apnea Cause AFib?

While causation might be hard to determine right now, what we do know is that the two conditions are closely linked.

If you’ve been diagnosed with AFib, you might want to get checked for sleep apnea as well. According to a 2018 review from the Journal of the American Medical Association, OSA affects 3 to 49 percent of the general population. The same review tells us this prevalence rests between 21 and 74 percent for people with atrial fibrillation.

Does AFib Cause Insomnia?

A 2017 paper from Frontiers Neurology explains one barrier to establishing a causal relationship between AFib and OSA. Both conditions share common risk factors based on cardiovascular health.

In other words, many people who have both AFib and OSA also have cardiovascular issues. It’s hard for scientists to rule out the possibility that a heart condition could be causing both AFib and sleep apnea.

In addition, this paper suggests a multidirectional link between AFib, OSA, and stroke. According to the researchers, AFib is a known risk factor for stroke, and the relationship between AFib and OSA might play a larger role in stroke risk than previously thought.

Does Insomnia Increase the Risk of AFib?

A 2017 study of over 64,000 cases of insomnia found a significant link between insomnia and atrial fibrillation. Their specific hypothesis was based on a causal relation. In other words, they wanted to know whether insomnia was a risk factor for AFib and not just something that happened alongside it.

They concluded that yes, insomnia did present a significant risk for the development of atrial fibrillation.

Another study, published in 2018 in Heart Rhythm, went a bit broader. The researchers of this paper found the same insomnia link to AFib, but they also studied sleep quality in general.

The insomnia portion of the study followed the data of over 14 million Californian residents. It found that people who had a diagnosis of insomnia had a 36% increased risk of developing atrial fibrillation.

And the general sleep quality portion tracked about 5,700 participants. It found that frequent nighttime awakening predicted a 33% higher risk of AFib. The researchers also connected decreases in rapid eye movement (REM) sleep with a higher risk of AFib.

What Triggers AFib During Sleep?

Atrial fibrillation has to do with the electrical signals of your heart. Normally, these signals are very regular, making up the reliable heartbeat we’re all familiar with. But, people with atrial fibrillation experience irregularities or quivers in their heartbeat.

Some researchers connect nighttime awakening with a disturbance in these electrical signals. If you have sleep apnea, you might wake up several times during the night due to a sudden lack of oxygen. These sudden awakenings cause mechanical stresses and chemical changes in your heart.

The idea here is that these frequent moments of waking up during sleep might be linked to heart irregularities. Over time, this may contribute to the development of conditions like atrial fibrillation.

Not every case of sleep apnea is the same. Doctors often categorize the cases into at least two different types: Obstructive Sleep Apnea and Central Sleep Apnea. Each type has its own relationship with AFib.

Obstructive Sleep Apnea (OSA) is the type of sleep apnea most commonly linked to the development of atrial fibrillation. One study, published in the Arrhythmia and Electrophysiology Review in 2019, explains why this might be the case.

First, there’s the possibility that OSA itself could be a risk factor for atrial fibrillation. This link is built on OSA symptoms like hypoxia (oxygen deprivation), inflammation, and nervous system effects. Researchers think these symptoms might contribute to the development of AFib.

Then, there are the complications of Obstructive Sleep Apnea. According to this study, continuous airway pressure helps reduce the burden of AFib. It also increases the chances of success for AFib interventions.

Without proper treatment, OSA could get in the way of this. Its interference with the airway could prevent successful AFib treatment.

A study from October of 2020 provides new evidence for a causal link between Central Sleep Apnea (CSA) and atrial fibrillation. The authors of the study point to symptoms of CSA as potential causes of AFib. These include hypoxia (oxygen deprivation) and irregular levels of carbon dioxide.

The study also suggests that the treatment of CSA can lower the rates of atrial fibrillation development in people who are at risk. When patients show signs that they might develop AFib, they often go through preventative treatment.

AFib prevention can happen in the form of pharmaceuticals or catheters. According to this study, CSA can affect the success of both forms of treatment.

The idea here is that if those with AFib get CSA treatment first, then they might have a better shot at AFib prevention.

Continuous positive airway pressure (CPAP) treatment is one of the most common ways doctors treat sleep apnea. But if sleep apnea is connected to AFib, can CPAP therapy treat both at the same time?

Well, not exactly. CPAP therapy does not directly treat or prevent AFib. But, as we described in the previous two sections, sleep apnea can interfere with AFib treatment and prevention methods.

So, sleep apnea treatment methods like CPAP therapy can potentially increase efforts against AFib. For people at risk of developing AFib, this might include antiarrhythmic prevention treatment.

Researchers have linked sleep apnea and AFib in a variety of ways. First, they consider the effects of sleep quality itself on the development of AFib. Sleep apnea results in sleep disturbances, potentially leading to a higher risk of developing AFib.

Finally, there’s the effect of sleep apnea on AFib care. Multiple studies have connected continuous airflow with successful AFib prevention efforts and treatment methods. When your sleep apnea is under control, you might have better chances of handling AFib.