Are Tinnitus and Sleep Apnea Connected? 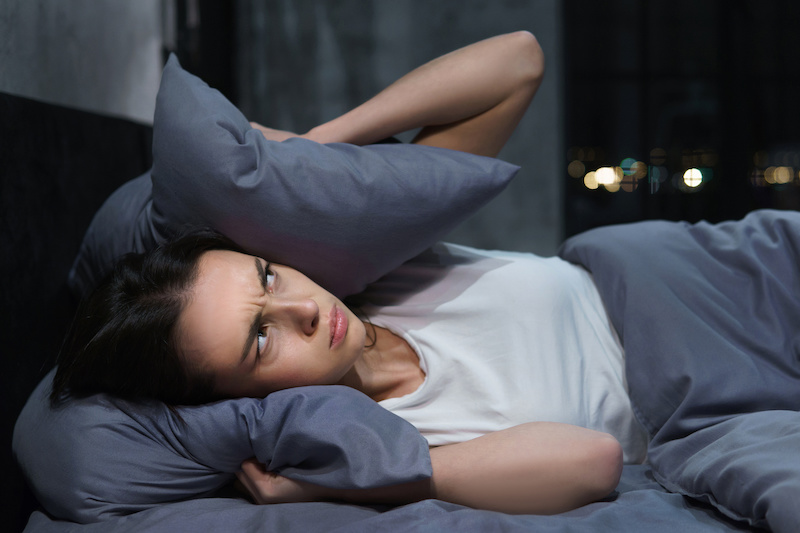 Do you experience both tinnitus and sleep apnea and wonder whether they may be related? Tinnitus is a condition that can keep you up at night through internal sounds. It may also be an indicator that you’re suffering from an underlying disease or condition such as hearing loss, hyperthyroidism, or anemia.

If your tinnitus is keeping you up at night, your struggle may be uniquely solved through the use of CPAP machines that treat sleep apnea. Through the unique relationship between sleep apnea and tinnitus, the use of a CPAP machine may be able to resolve both issues simultaneously.

With this in mind, read on to learn all about the connection between sleep apnea and tinnitus so that you can get the relief you need.

Tinnitus is the sensation of hearing noises in your ears that don’t have any external root cause. These noises are often more pronounced when the background noise is low and can be in the form of ringing, buzzing, whistling, or other similar sounds. These phantom noises can either be continuous or come and go.

Tinnitus is an audiological and neurological condition. However, it can also be a symptom of other underlying conditions. According to the American Tinnitus Association (ATA), over 50 million Americans experience tinnitus in some form, which is almost 15 percent of the general public.

Most people experience subjective tinnitus, which is when the noises are only able to be perceived by the individual who’s experiencing them.

It’s important to remember that tinnitus can be a symptom of underlying health conditions. Once the root cause of tinnitus is treated, some people find relief in their tinnitus symptoms at the same time.

Either age-related hearing loss or noise-related hearing loss are common causes of tinnitus. Researchers have found that tinnitus is often associated with damage to high-frequency hearing. As you lose the ability to hear certain sound frequencies, your brain may make up for the loss of sound through its own adaptation.

Obstructions in your middle ear can build up pressure within your inner ear and affect your eardrum.

These blockages could be:

Once these blockages are cleared by a doctor, you may find relief. It’s important that they’re cleared as soon as possible in order to avoid permanent damage. Doctors are able to clear ear wax blockages and other buildups through the use of a tool called a curet, suction, or warm water.

Traumatic injury to your head, neck, or brain can cause tinnitus. Concussive shock can impact your brain’s auditory processing areas and create tinnitus symptoms. Head and neck trauma can also cause tinnitus due to the way the injury impacts your nerves, muscles, and blood flow.

If you are experiencing TMJ, you will feel tension is the area where your lower jaw connects with your skull in front of your ears. Since it’s near the auditory system, people who experience TMJ disorder are also at risk of experiencing tinnitus at the same time.

Other Diseases and Disorders

Tinnitus can also be a symptom if you experience the following conditions and disorders. This is why it’s important to let your doctor know that you’re experiencing tinnitus as it can be the first indication of other issues.

The majority of tinnitus symptoms are noises that don’t have any external cause. These are sounds that are only experienced by the individual. From dial tones and buzzing to music, there are a variety of noises that people can hear that nobody else can.

Tonal tinnitus is a nearly continuous tone. Pulsatile tinnitus is the experience of pulsing sounds that are usually in time with a person’s heartbeat. Lastly, musical tinnitus is the perception of music or even singing. However, this is one of the rarest tinnitus symptoms.

The Connection Between Tinnitus and Sleep Apnea

Now that we’ve reviewed the causes and symptoms of tinnitus, you may be wondering if there’s a connection between tinnitus and sleep apnea. According to a study on sleep disturbances associated with tinnitus, 69 percent of patients reported that they had poor sleep quality. Researchers concluded that their patients could experience better sleep by reducing the severity of their tinnitus.

However, sleep apnea and tinnitus are linked even further. Obstructive Sleep Apnea could be a cause of tinnitus because snoring at high frequencies could cause noise-related hearing loss. Hearing loss is one of the most common causes of tinnitus as your brain struggles with the reduced sound frequencies.

People who have both sleep apnea and tinnitus may find relief through the use of a CPAP machine due to your improved blood oxygen levels possibly reducing the pressure on your middle ear.

Tinnitus and sleep apnea can be two interrelated conditions that can greatly affect the quality of your daily life as a result of poor sleep. Not being able to sleep your recommended number of hours of sleep a night can affect your career, your relationships with family and friends, as well as your ability to operate machinery safely.

Thankfully, the link between sleep apnea and tinnitus provides answers. By increasing the blood oxygen levels in your body through sleep apnea treatment, you may be able to relieve the pressure on your middle ear as well as the symptoms of tinnitus that comes along with it. The treatment for your tinnitus also depends on the underlying causes.

Talk to your doctor to get on your way to a quiet and comfortable night of sleep.