Keeping it Clean: How a Clean House Impacts Our Sleep

When it comes to keeping your home neat and clean, the demands of daily life can pose plenty of challenges. Even for those who prefer their homes spotless, it’s hard to find the time to tackle the whole to-do list.

At the end of a long day, who gets excited at the prospect of mopping the floor? When the precious weekend arrives, do you really want to spend it reorganizing closets? Sure, it’s probably time to wash your sheets, but what’s the harm in waiting one more night?

But while delaying chores is an all-too-common temptation, this procrastination could have concerning consequences. According to experts, a messy home or bedroom can elevate our anxiety, undermining our sleep. Moreover, lax cleaning habits can cause health issues, allowing irritants to collect around the house.

We surveyed about 1,000 Americans, tracking how their cleaning activity correlated with the quality of their sleep and emotional well-being. Our findings show how many of us let clutter accumulate–and the price we might pay in terms of rest and peace of mind.

Good Rest vs. the Mess 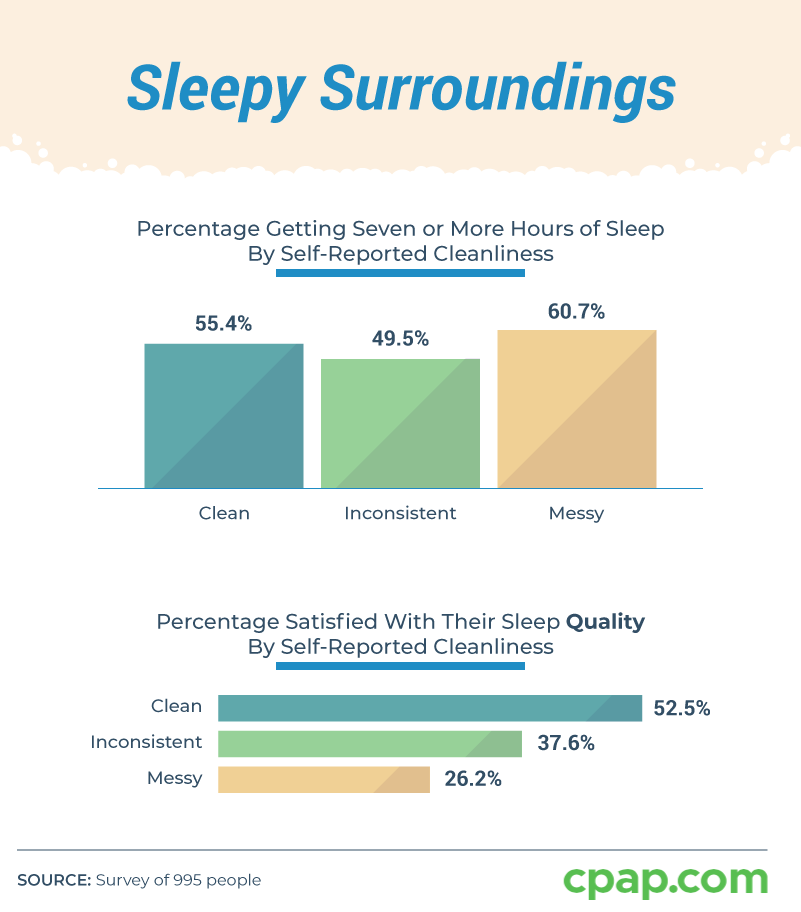 At first glance, our findings suggest that messiness actually corresponds to getting more rest. Of respondents who described themselves as habitually messy, 61% averaged seven hours or more of shut-eye a night–a higher percentage than among self-described “clean” people and people with more varied habits. Specific chores do take up time: Housework consumes roughly half an hour of the average American’s day. Perhaps messier individuals simply skip these efforts and spend their time asleep instead.

While messy folks enjoyed a greater quantity of sleep, on average, the quality of their rest was particularly poor. Indeed, only 26% of messy respondents felt satisfied with their sleep quality. By contrast, clean people were roughly twice as likely to feel content with their sleep.

What might explain these seemingly clashing data points? According to scientists, bedroom clutter can negatively affect our rest in many respects, making it more difficult to fall and stay asleep. Our findings clearly support these conclusions, with only a small portion of messy people reporting restorative sleep.

Moreover, there’s another connection between sleep troubles and cleaning: Among respondents who reported having some form of sleep disorder, roughly half had gone on a nocturnal cleaning spree.

Sleeping With a Mess

Much research suggests that regularly laundered sheets can improve our sleep (and deliver a host of other health benefits). Perhaps aware of this fact, respondents with sleep disorders tended to wash their bedding more often than people without them. Overall, people washed their sheets every 13 days, on average. Unfortunately, this figure falls well short of the weekly washing recommended by experts. Additionally, messy and clean respondents reported vastly different patterns. On average, messy people washed their sheets every 18 days–or about a week longer between washes than the clean cohort.

Aside from accumulated grime, most respondents had slept with some sort of object in their beds. Roughly 40% had slept alongside their cell phones, which tend to be repositories for multiple germ varieties. Sadly, keeping tech and other objects close by could be undermining these respondents’ sleep quality. Sleep scientists firmly endorse simplicity and tidiness in the bedroom; With less disorganization in the immediate environment, the brain can drift off more easily. The presence of screens can be especially problematic because they emit blue light that can disrupt your natural sleep patterns. 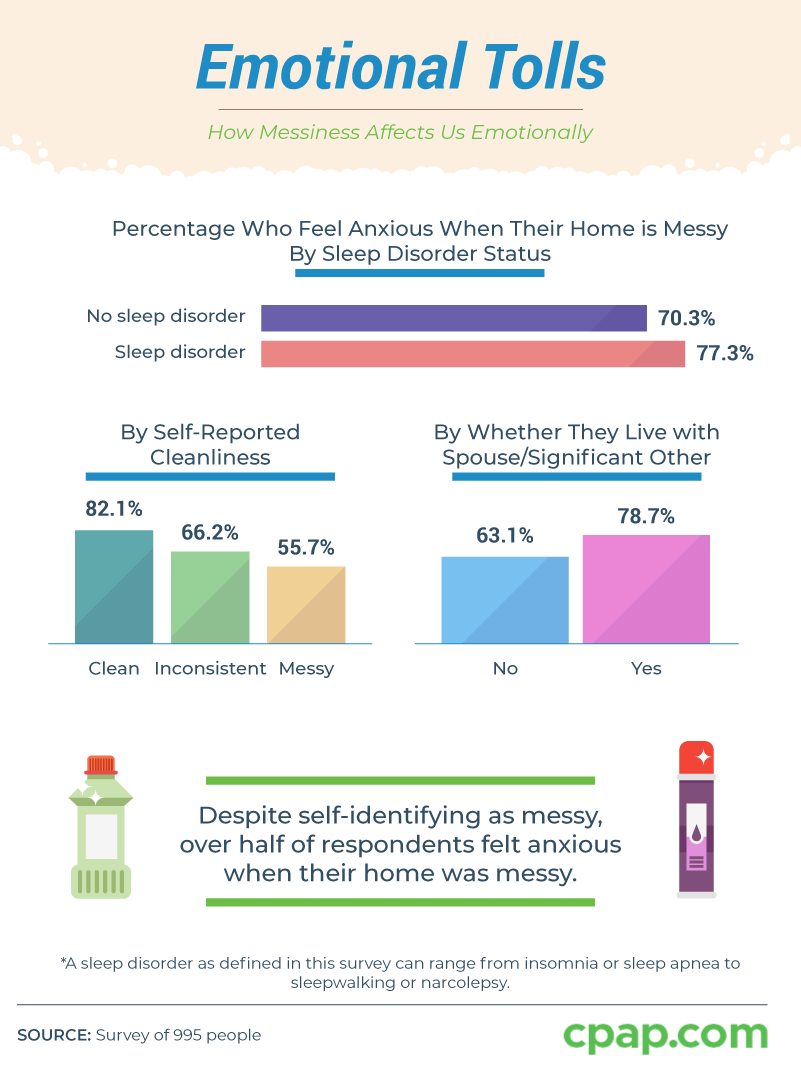 You don’t need to be a neat freak to feel uneasy about clutter; Several studies have shown that disorganized environments promote anxiety. Cluttered spaces can actually trigger the production of cortisol, a known stress hormone, in the human body. Among our respondents, the vast majority felt anxious when their home was messy, whether or not they had a sleep disorder.

To be sure, habitually clean people were more likely to feel anxious about disorder around the house than those with looser habits. But a majority of messy people admitted feeling uncomfortable when their homes were untidy. This finding suggests that most messy people do feel some stress in connection to their mess, suffering through some degree of anxiety on an ongoing basis.

Interestingly, people who lived with a spouse or significant other were much more likely to feel anxious when their homes were cluttered. Could this uneasiness reflect the possibility of cleaning-related arguments between cohabiting partners? 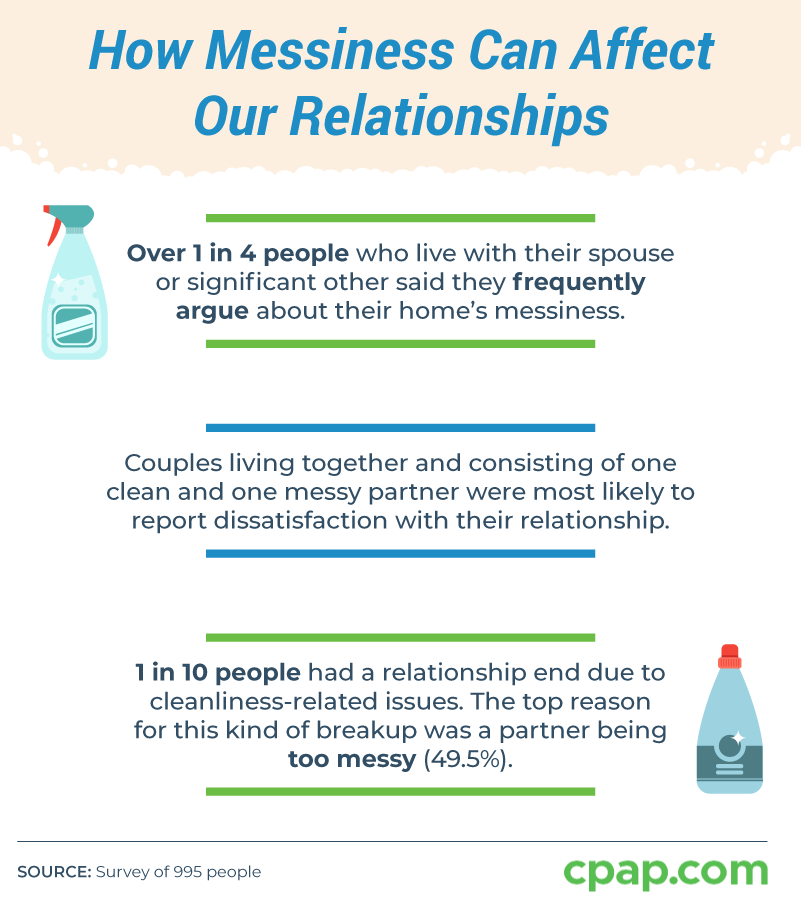 Indeed, more than a quarter of respondents who lived with their significant other said they frequently fight about messes at home. As couples’ therapists observe, the division of chores between partners can be fertile ground for resentment and recrimination. To this point, couples with one clean partner and one messy partner were most likely to feel dissatisfied in their relationship. Furthermore, 10% of respondents reported that issues of cleanliness had caused the end of a past relationship. 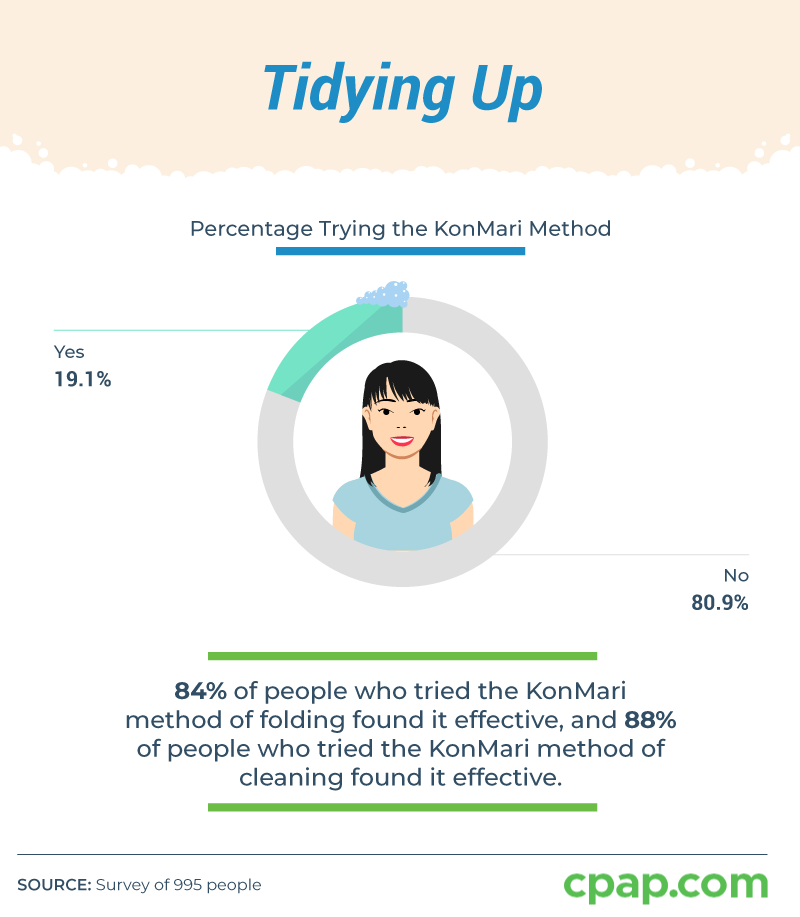 In contemporary discussions of organization and cleaning, the influence of Marie Kondo looms large. The celebrity tidying guru champions simplicity, and her patented KonMari approach includes methods of folding and cleaning designed to cut clutter.

While just 19% of respondents had personally tried KonMari techniques, most who did found them worthwhile. Her cleaning method was particularly successful: 88% of people who tried it found it effective. While some find her decluttering goals too aggressive (particularly with regard to discarding books), our data certainly supports her tips for cleaning and folding. 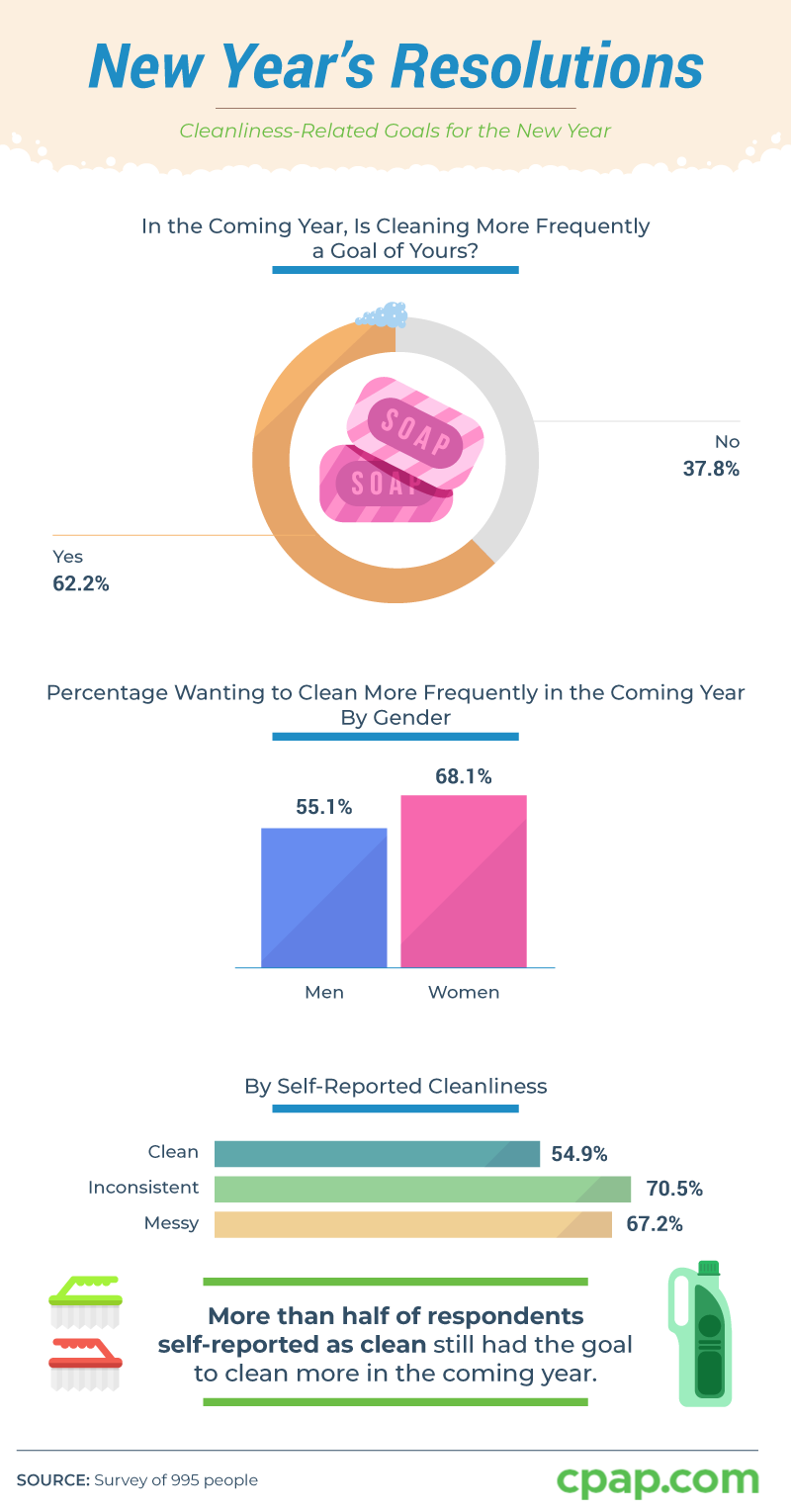 Whether through the KonMari approach or other methods, most people hoped to take their cleaning up a notch next year. More than 6 in 10 respondents had a desire to clean more, though women were particularly likely to possess this goal.

Interestingly, even among people who regarded themselves as clean, most wished to do even more tidying up in the year to come. This finding speaks to the seemingly endless stream of potential housekeeping activities; Even when your home seems immaculate, there’s always something else to sanitize. Oddly, people with varied cleaning habits were even more intent on upping their game next year than people who were typically messy. Perhaps having experienced the feeling of a clean home, this crowd hopes to maintain it more consistently.

Cleaning for Comfort: A Practical Approach to Peace of Mind

As our findings clearly indicate, a disorganized home can elevate the anxiety of its residents, sometimes leading to conflict. And while messy individuals may enjoy greater quantities of sleep overall, they’re less likely to be satisfied with the rest they get.

We certainly don’t intend to cast judgment on anyone’s cleanliness; after all, our findings show that most of us aspire to clean more often. But if you frequently feel stressed or tired— even in the comfort of your own home—tidying up more often could be one constructive way to improve your daily experience. It’s certainly worth a try; Even if you don’t see immediate benefits for your sleep or mood, a cleaner home is a great consolation prize.

Of course, improving your sleep and health rarely requires just one solution. Self-care involves many dimensions of daily life and differs from person to person. If you’re struggling with sleep and waking up tired after a full night’s rest, you may be interested in taking a sleep study to find out if you have one of the three types of sleep apnea.

At CPAP.com, we’d be happy to play a part in your rest and well-being. If you find out you do have sleep apnea, you may be interested in learning about the three types of machines rated as the top choice to treat this sleep disorder. Once you and your doctor arrive at the need for treatment and your doctor writes you a prescription, we make it easy and affordable to get the right CPAP machine for your personal sleep therapy plan.

To gather the data shown in the study above, a survey was run using the Amazon Mechanical Turk service. A total of 995 people were surveyed, including 454 men, 539 women, and two individuals who chose to identify as neither. Four hundred ninety-four respondents identified as having at least one medically or self-diagnosed sleep disorder, and 501 identified as not having any sleep disorders.

All data presented above rely on self-report; there can be issues with self-reported data, like telescoping and exaggeration. To combat these, respondents were given an attention-check to help ensure that only participants who were paying full attention were allowed to be included in the study. During the survey, respondents self-reported if they had a medically- or self-diagnosed sleep disorder; sleep disorders could range from things like sleepwalking and sleeptalking to conditions such as sleep apnea or narcolepsy.

Know someone who shares your feelings about the calming powers of cleaning? We encourage you to send this project their way! However, please use our images and information solely for noncommercial purposes. Additionally, we ask that you link back to this page whenever you share our work on social media or your own website. Doing so lets other readers find and enjoy all our results.