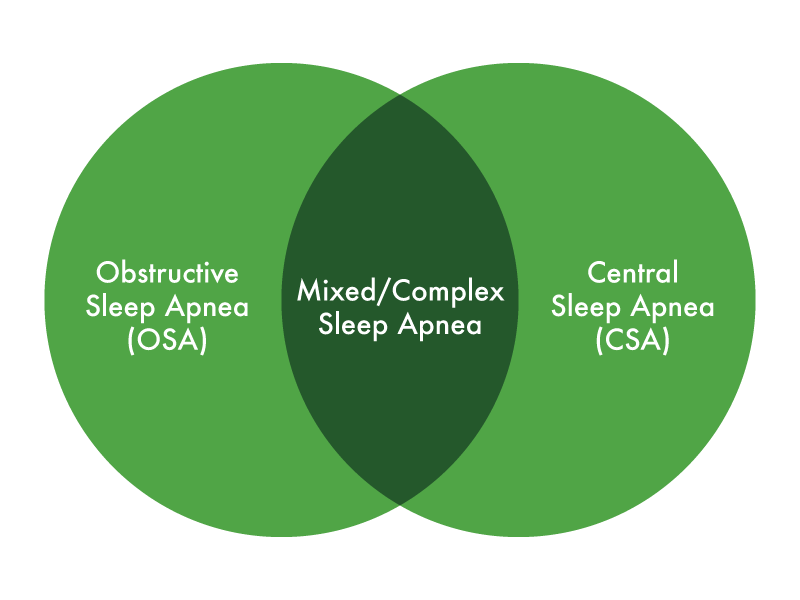 Unless you are brand new to sleep apnea, you likely know by now that there are three types of sleep apnea: Obstructive, Central, and Complex Sleep Apnea. If you are new to sleep apnea treatment, then you’ve come to the right place to further understand it and how you can find the help you need to manage yours.

Quality is often just as important as quantity when it comes to sleeping. For instance, if you doze off for the majority of an eight-hour flight between New York and London, you’ll still find yourself tired because it’s unlikely your body reached the stages of sleep it needed to deliver you the sufficient rest to arrive refreshed.

But what does dozing off on a transatlantic flight have to do with sleep apnea? Living with any of the three types of sleep apnea is a similar problem: you are not only not getting quality sleep but you are also not getting enough of that quality sleep. With sleep apnea, your body is never staying in a single stage of sleep long enough for it to do what it needs to do at that stage.

Each type of sleep apnea is manifested in your body differently, but they all have one thing in common: they disrupt your ability to get quality sleep. Understanding the differences between each type is key to promoting healthy sleep and helping you achieve the amount of rest you need nightly to be alert and productive the next day.

Below, we take a closer look at those three types of sleep apnea and help you better understand each one’s causes, symptoms, and how to get the help you need.

When you hear someone say they have sleep apnea it’s likely they are referring to Obstructive Sleep Apnea—the most common form of sleep apnea. OSA is a sleep disorder in which the soft tissues of the mouth and throat expand and relax during sleep. The relaxed muscles can block the airway, preventing air from reaching the lungs. This, in turn, lowers the blood oxygen content and can cause a person to wake up gasping or choking for air. Over the course of the night, the process repeats itself, and as a result, you don’t get very good sleep.

The main symptoms of OSA include:

There are several risk factors of OSA—some of which you can control while others you can’t. However, typically those with the following conditions will be more likely to develop OSA. Having any of these risk factors doesn’t necessarily mean that you’ll have or develop a sleep disorder, but if over time you notice your snoring gets worse or your breathing stops repeatedly overnight, you may want to get it checked out:

OSA is classified into three groups: mild, moderate, and severe. Each group refers to the average number of times per hour the sleeping individual suffers from an interruption in breathing. Each one of those events counts as one event in the apnea-hypopnea index (AHI), which is then used to determine whether a person has mild, moderate, or severe sleep apnea.

Mild sleep apnea occurs if a person has an AHI score between 5 and 15 and moderate means their AHI is above 15 and up to 30. Those with severe OSA have an AHI score of more than 30. It’s estimated that out of the nearly 22 million Americans with sleep apnea, 80% of those cases are moderate to severe.

How to Treat Obstructive Sleep Apnea

CPAP therapy is the most common treatment for OSA. It works by introducing a constant flow of air from your CPAP machine into your mask. The continuous pressure helps keep your airway open and respiratory function at normal levels, which allows for easier breathing during sleep.

OSA doesn’t just happen while you’re sleeping; it can occur anytime an individual lies down. As long as the conditions are right for the airway to relax and the muscles of the throat to rest in the airway, OSA can occur.

Surgery may also be an option for severe cases and when other treatments have failed—particularly if the source for OSA is beyond their control, such as those who have a narrow throat or enlarged tonsils or adenoids. There are different types of surgery for sleep apnea, including uvulopalatopharyngoplasty (UPPP), tonsillectomy, maxillomandibular advancement (MMA), and radiofrequency ablation (RFA).

Your doctor will likely not recommend any surgical procedure unless absolutely necessary.

Though rare, it’s been observed in those with OSA who also have specific heart conditions that some medications taken for the heart condition causes the OSA to begin manifesting itself as Central Sleep Apnea (CSA) mid-sleep. Research on the topic is still being explored due to the rarity of the occurrence. However, if you are considering treating your sleep apnea with CPAP therapy and have any medical condition, don’t forget to always discuss those with your physician.

CSA is a less common form of sleep apnea compared to OSA. It is generally caused by medical concerns that affect the brain. CSA is a condition in which the signals to breathe are not sent by the brain, and as a result, the person does not draw a breath.

The difference between CSA and OSA is that a blocked airway isn’t what prevents a person from breathing—people with CSA experience respiratory distress as the brain fails to properly signal the muscles that control breathing function.

This is different from OSA in that there doesn’t have to be a blocked airway that prevents a person from breathing. Those with Parkinson’s, those who frequently take narcotics, or anyone who has experienced an infection that has affected the brain can suffer from CSA.

Symptoms of CSA include:

This ‘dropped connection’ of brain signals may sound similar to what happens in a seizure, but there is no medical evidence between epilepsy and CSA specifically. There are, however, links to epilepsy and sleep apnea in general.

You’ll notice that many of these symptoms differ from OSA’s symptoms but are also similar in a way. The key difference is that the brain of a person with CSA has difficulty sending the right stimuli to breathe. It’s then no surprise that a lot of the causes of CSA are related to events that impair neurological functions and not necessarily ones that impact or block muscles as is the case with OSA:

Although treatment options are a little different than with OSA, CPAP therapy is still the leading choice for most CSA cases.

BiPAP, or bi-level positive airway pressure, is another treatment option for CSA. While similar to CPAP machines, a BiPAP machine modifies the level of air delivered to you based on whether you are breathing in or out. This helps those with respiratory issues as it demands less effort during exhalation.

Complex Sleep Apnea is a newcomer to sleep apnea, having just been discovered in 2006.

Researchers found that people who seemed to have severe OSA were not completely helped by CPAP therapy. Research eventually discovered that the real culprit was neither OSA nor CSA, but rather a combination of both, which they dubbed Complex Sleep Apnea. To simplify the alphabet soup of acronyms, Complex Sleep Apnea is sometimes abbreviated in medical research as CompSA to avoid any confusion between it and Central Sleep Apnea (CSA), so we’ll also use that same term throughout to describe Complex Sleep Apnea.

Having been discovered less than fifteen years ago, treatment options for CompSA are still in the developmental and experimental stages. Most doctors today will recommend using a CPAP machine at a low-pressure setting. This helps ensure the individual doesn’t cause too much stress on their system and trigger an onset of CSA. CPAP and BiPAP machines are often suggested, with your sleep specialist determining which machine is providing you the greatest benefit.

Another increasingly more common therapy type for CompSA is adaptive servo-ventilation therapy (ASV). ASV therapy is a non-invasive ventilatory treatment, created for adults with OSA and CSA. ASV treatment uses a positive airway pressure machine to monitor your breathing for any changes or sudden stops.

ASV machines are a lot like APAP machines in that they can automatically adjust pressure based on the wearer’s breathing. The key difference is that while an APAP machine can ramp up and down to virtually any pressure the machine is capable of delivering, an ASV machine adjusts itself only within a range of pressure that will be recommended by your doctor based on your test results. This is because CSA complicates how much pressure you can withstand while asleep (hence that low-pressure setting recommendation if using CPAP for CSA), so the machine adjusts itself but only within a specific range.

We hope that this advice will help you better understand the complexity of sleep apnea.

Sleep apnea is a condition that can be managed by having the right medical care and the right medical diagnosis to make sure you also have the right equipment. Whether you need a CPAP, APAP, BiPAP, or ASV machine, the first step if you have experienced any of the symptoms commonly associated with each type of sleep apnea is to contact your physician for a diagnosis and medical recommendations.

The symptoms discussed here may also be associated with other disorders, so a doctor would be able to advise whether you need a sleep study or if you should be concerned with something else.

If you need a sleep study, you may even be eligible to complete a home sleep study (HST), which doesn’t require you to leave the comfort of your home. Explore your options when it comes to a sleep study to find what would work best for you.