Sleep Apnea in Children: Recognizing the Symptoms and Getting Your Child Treatment

The American Sleep Apnea Association estimates that 1% to 4% of children may have Sleep Apnea. Sleep Apnea in kids can also contribute to hyperactivity and attention issues, and leads to more serious medical complications. Symptoms of Sleep Apnea in children can be caused by many different risk factors. Read on to learn how Sleep Apnea could possibly be impacting your child.

The American Sleep Apnea Association estimates that Sleep Apnea affects between 1% to 4% of children, and many of these children are between 2 and 8 years of age. Although it’s possible for children to outgrow Sleep Apnea, these sleep disorders can still cause many problems for children while they persist.

makes it difficult for children to pay attention and may increase hyperactivity, while apnea is also associated with heart problems, learning difficulties, behavioral issues, and delayed growth. Since Sleep Apnea has such an impact on a child’s overall health and well-being, it’s important to be aware of the symptoms of pediatric Sleep Apnea. If your child has any symptoms, seek treatment immediately.

Symptoms of Sleep Apnea in Children

Sleep Apnea occurs when a person stops breathing while they are sleeping, and in most cases, it’s caused by an obstruction of the airway. When breathing stops, the oxygen levels in the body drop and the brain usually wakes you up so airways reopen. With Sleep Apnea, the pattern continues throughout the night, which keeps children from reaching the deep, restorative level of sleep they need.

As briefly mentioned earlier, according to the American Journal of Respiratory and Critical Care Medicine, during the day, children who have Sleep Apnea may display symptoms like:

If you notice any of these symptoms, it’s a good idea to talk to your pediatrician about your concerns. Your pediatrician may recommend a sleep study for your child or may send you to a sleep specialist.

What Causes Sleep Apnea in Toddlers and Children?

Enlarged adenoids and tonsils are the most common cause of Sleep Apnea in toddlers and children. When the tonsils are enlarged the airway can become blocked during sleep, causing apneas to occur.

Some of the risk factors for Sleep Apnea in children include:

In rare cases, Sleep Apnea may occur when the brain isn’t sending signals to the muscles controlling breathing, resulting in a lack of oxygen in the body. This is known as Central Sleep Apnea and may be caused by head injuries or other conditions that affect the brain. However, Central Sleep Apnea more commonly affects older adults.

Can Babies Have Sleep Apnea?

According to the American Journal of Respiratory and Critical Care Medicine infant Sleep Apnea can occur, and apneas in infants can be obstructive, central, or mixed. These

breathing problems in babies can result in severe complications, including the development of a slow heartbeat and not having enough oxygen in the blood, a condition called hypoxemia. In some cases, infants with Sleep Apnea may lose consciousness and require resuscitation.

Symptoms of infant Sleep Apnea include:

Infant Sleep Apnea can be scary, so if you notice any of the symptoms in your baby, contact your doctor immediately.

According to the Korean Journal of Pediatrics, one of the most common treatments for Sleep Apnea in children is the removal of the tonsils and adenoids if they are enlarged. If 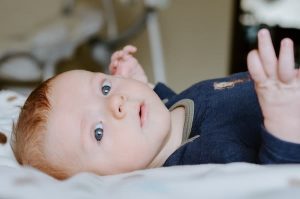 your pediatrician feels like your child’s Sleep Apnea may be caused by enlarged tonsils or adenoids, you may be referred to an ear, nose, and throat doctor (ENT). Your child may need an adenotonsillectomy to remove both the tonsils and adenoids, and for many children, this resolves the problem.

When the adenoids and tonsils aren’t the cause of Sleep Apnea or the symptoms remain after your child’s adenotonsillectomy, then continuous positive airway pressure (CPAP) therapy may be recommended for your child. CPAP therapy involves wearing a mask that covers the mouth and nose while your child is sleeping. The mask is connected to a CPAP machine, which continuously pumps air to keep airways open and deliver air to the lungs. Since children and toddlers have smaller heads than adults, it’s important to get a pediatric CPAP mask specifically designed for the needs and comfort of a child.

Other treatments that may be used to address other risk factors in unique cases include:

Sleep Apnea does occur in infants, toddlers, and children, and failing to treat it can have a serious impact on your child’s overall health, behavior, and development. Seek treatment if your child displays any of the symptoms of Sleep Apnea in children, and you can work together with your pediatrician to find the best treatment to ensure your child begins getting healthy sleep.

To learn more about CPAP and Sleep Apnea and to enjoy getting great savings on equipment delivered to your inbox, subscribe to our CPAP.com newsletter today.

6. Kirk, Valerie G. and Yunker, Warren K. Treating Pediatric Obstructive Sleep Apnea. Do We Have The Data? Published in the American Journal of Respiratory and Critical Care Medicine, September 2016. Accessed on August 8, 2018.