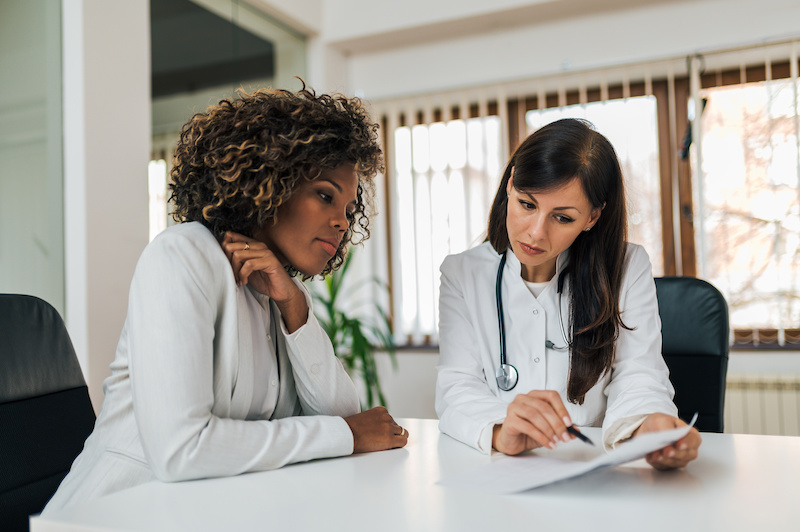 Each person is unique in their traits, characteristics, body shape, posture, and facial structure. You inherit half of your genes from your mother and the other half from your father. The genetic makeup of every individual is full of instructions covering every aspect of your physical shape, structure, along with our vulnerabilities to certain diseases.

Throughout your life, you may find yourself at risk for a different set of conditions than the person sitting next to you, based on the genetics passed down from one generation to the next. Sleep apnea is no different. Some of us are more prone to developing certain sleep apnea risk factors than others, and the risk factors can be what ultimately causes sleep apnea.

Sleep apnea can be hereditary though not always. That’s because there are many factors that influence whether or not a person is likely to develop sleep apnea and some of them are made up of things decided by family history.

For example, some people are born with a more naturally narrow airway than others or with excess tissues due to nothing other than family history. When combined, it can create the right conditions for sleep apnea to develop within your genealogic tree.

What Is the Difference Between Genetics and Heredity?

Let’s take a pause here to better understand genetics and heredity. When we talk about medical conditions being passed down, it’s common to use the two synonymously, but that’s incorrect.

You may already know from junior high biology that your body’s genes are made of deoxyribonucleic acid (DNA). If your body were a house, builders would use DNA as the prime material to build you. Your body is composed of over 20,000 genes, and 99% of them are the same in virtually everyone.

The other 1%? Heredity—meaning something that is passed down from generations via genes and includes information such as hair and eye color and predispositions to certain medical conditions.

While genes are something your body has, heredity is technically the right term to use when we talk about whether or not a trait your body possesses was handed down from your parents’ genes or if it’s something that your body developed over time.

Snoring is caused by the vibrations of certain parts of the airway as air rushes past during sleep. The airway vibrates because the tissues of the mouth and throat are relaxed during sleep.

Genetics provide the geometry of a person’s airway, and those with a family history of snoring are more likely to snore than people that didn’t report snoring in their family.

Only because you snore doesn’t necessarily mean you will develop one of the three types of sleep apnea though your odds of doing so are certainly higher.

When a person is at risk for developing Obstructive Sleep Apnea (OSA), generally, the following risk factors are present. In order to better understand them, let’s break them down by heredity, genetics, or controllable factors, such as obesity, alcohol consumption, or exercising.

Some of these risk factors, like family history, large tonsils, a small lower jaw, and a large neck circumference are all purely genetic and can lead to developing OSA later in life. Other risk factors, like obesity and alcohol consumption, are both factors that most of the time we have some control over.

Is OSA Hereditary or Genetic?

Now that you know the difference between heredity and genetics, which one is it: is OSA hereditary or genetic? OSA is largely attributed to genetics. In 2019, researchers studied the genetic structure of adults with OSA and concluded that OSA is best conceptualized as a chronic, complex disease that likely reflects the influence of multiple genetic factors.

Genetics, Heredity, and Other Apneas

There are three types of sleep apneas. Now that you know about the most common one, OSA, let’s have a look at the other two: Central Sleep Apnea (CSA) and Mixed or Complex Sleep Apnea. The latter is sometimes referred to as CompSA to not confuse it with CSA.

With a condition like CSA or CompSA, there’s something other than a blocked airway to consider. At least some of the time, the brain isn’t sending the signal to breathe. There could be any number of reasons for this including:

Complex Sleep Apnea is a condition in which both OSA and CSA exist at the same time. So not only is there a blockage of the airway, but there’s also a component to the condition in which at times, the brain simply isn’t sending the signal to breathe. Treating CSA requires managing both types of sleep apnea simultaneously and is normally doing using a BiPAP machine. A BiPAP machine allows your doctor to dial in two different pressures: one for inhaling and one for exhaling to make breathing more comfortable and effective.

How Is Sleep Apnea Diagnosed?

Typically, sleep apnea is diagnosed by undergoing a sleep study. The sleep study measures heart rate, respiration, blood oxygen content, among other things, and can help determine if you have sleep apnea.

Depending on the results of the study, you may be diagnosed with mild, moderate, or severe sleep apnea. From there, your doctor will recommend a course of treatment which may include CPAP therapy.

Andre is a newcomer to CPAP therapy. He was diagnosed in 2020 through CPAP.com’s home sleep test. Andre enjoys learning more about living with sleep apnea, advances in CPAP technology and treatment, and sharing his insights with the CPAP.com community.