The Connection Between Sleep Apnea Dizziness and Vertigo 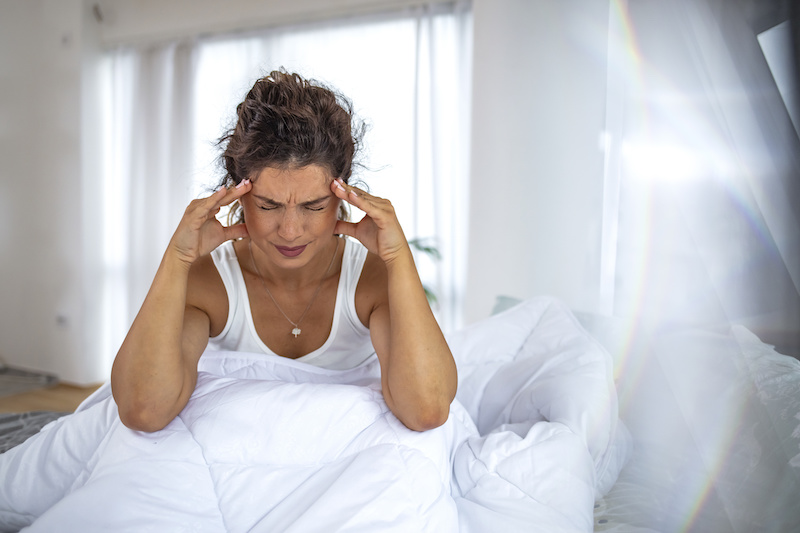 Sleep apnea is a condition that occurs when the airway becomes blocked during sleep. It can partially or completely stop the airflow, causing an individual to have disrupted, uncomfortable sleep. Even though it is a serious issue, many people do not realize they are living with it. If you have undiagnosed sleep apnea, you may feel fatigued upon waking or experience daytime sleepiness.

Sleep apnea is known by many for the toll it can take on the human body, especially if left untreated. Sleep apnea can cause high blood pressure, heart problems, and increase the risk of developing type 2 diabetes and metabolic syndrome. However, the effects of sleep apnea on the brain can be just as alarming, with some reporting serious side effects such as dizziness and vertigo.

Dizziness and vertigo often go hand-in-hand and sometimes can even be used synonymously, but they are different. At one point, dizziness was a catch-all term for similar conditions including vertigo. Dizziness is an altered sense of spatial orientation and a distortion of where you are within a space, causing your balance to just feel off. Vertigo, on the other hand, is truly the sensation of self-movement or the movement of your surroundings—it’s literally a spinning sensation.

Can Sleep Apnea Cause Dizziness and Lightheadedness?

Unexplained dizziness is a bothersome symptom for many. It can make it challenging to work, complete household chores, and pursue many favorite hobbies. There are many causes for dizziness, so if it is an ongoing concern, it should be discussed with a doctor. However, one common root cause of dizziness is sleep apnea.

When you are dizzy, you feel lightheaded and disoriented. The lightheadedness is the part of it where it feels like you are going to faint.

Most commonly, those who have sleep apnea and dizziness will feel it most severely first thing in the morning. You may be suffering from sleep apnea dizziness if you wake up disoriented and have to take a few extra moments to get your bearings before you feel steady on your feet and safe to walk. This is usually caused because the brain has been deprived of oxygen during the night and not functioning at 100 percent first thing in the morning, so trying to switch from the laying down position to an upright and moving position becomes troublesome.

At its most serious levels, this absence of oxygen is called hypoxemia, which can regress into hypoxia if left untreated long enough. When your body goes into hypoxia, vital organs begin shutting down due to a lack of oxygen. In aviation accidents involving cabin depressurization, for instance, hypoxia is frequently the cause of death. The absence of sufficient oxygen for breathing at high altitudes means vital organs quickly fail.

Is either dizziness or lightheadedness related to sleep apnea? Possibly. Do we know for sure? Unfortunately not just yet.

Is There a Connection Between Sleep Apnea and Vertigo?

Vertigo is a type of dizziness that comes on unexpectedly, or it can be an ongoing issue. For some, it presents itself as a feeling of spinning while for others it feels as though the world around a person is unsteady or shifting.

Vertigo is an inner-ear and balance disorder that can be caused by anything that affects the inner ear. For many, it begins with an ear infection or something similar. However, anything that affects the brain can transfer to the inner ear quite easily. This means that sleep apnea could be a factor leading to vertigo since it decreases the amount of quality sleep and reduces the amount of oxygen that goes to the brain.

Right now, some of you are probably wondering about the link between CPAP therapy and vertigo. CPAP machines are one of the most common and effective treatments for sleep apnea. It involves pumping extra air through a face mask to open up the airway and improve the flow of oxygen to the body.

However, could this extra air be causing pressure changes that lead to dizziness or vertigo? CPAP use has been linked to increases in air pressure in the ear. The positive air pressure is believed to travel through the eustachian tube into the middle ear and can cause problems. The eustachian tube is a canal that connects the middle ear to the upper part of the throat behind the nose.

While changes in air pressure have also been linked to vertigo attacks for people with an ear disorder, it’s hard to say whether this is what is happening when you hook up to your CPAP machine. New CPAP wearers have reported this but also state that it eventually goes away. If you start CPAP therapy and begin experiencing some new changes in your body, you want to consult your doctor.

Again, this is unfortunately another area that hasn’t been well studied. It’s possible this may be what’s causing your vertigo, but we don’t know for sure.

Some CPAP wearers do complain of dizziness while using their CPAP therapy. The mechanism for this symptom is not clearly known. Some believe that this might be due to the pressure change in the middle ear. If so, it’s a short-lived symptom as you get adjusted to your CPAP therapy.

However, the connection could be a little deeper than simply getting used to it over time since untreated sleep apnea involves interruptions in airflow to the body during sleep. For most, their sleep apnea is due to the collapse of the airway—Obstructive Sleep Apnea (OSA)—while for some the brain doesn’t correctly signal the muscles that control breathing. The latter one is known as Central Sleep Apnea (CSA) and accounts for 20 percent of sleep apnea cases. It’s also one of the three types of sleep apnea.

Sleep apnea and dizziness have been linked together for quite some time. In a recent study, Taiwanese researchers found that those with sleep apnea are more likely to experience vertigo than those without sleep apnea.

But, it’s hard to say if vertigo is caused strictly by air pressure changes. While the Taiwanese study had a large sample size, it’s still been hard for science to conclude what exactly is going on. You may be dizzy because your brain has been starved of oxygen during the night. All we know so far is that there’s definitely a link between sleep apnea and dizziness—but what exactly is that link is still unclear.

We know there is a link between it all, but since dizziness and vertigo are also connected to other various things, like the inner ear, it’s been difficult to conclude with any certainty what exactly is the connection here. Those links have eluded scientists for quite some time now.  However, now that more than 26 percent of Americans between the ages of 30 to 70 are estimated to be living with sleep apnea—a substantial increase from two decades ago—it’s likely that more research about the links between sleep apnea, dizziness, and vertigo are on the way.

If you’re concerned your lightheadedness and dizziness might be related to sleep apnea, consult with a medical professional or sleep specialist about doing a sleep study. The study measures your heart rate, respiration, blood oxygen content, among other things and can help determine if you have sleep apnea. Sleep studies can even be taken from home through home sleep studies.

9 thoughts on “The Connection Between Sleep Apnea Dizziness and Vertigo”